Near the end of 2021, I ran a survey asking indie musicians two basic things:

(For the rationale behind why this information matters – and why it’s surprisingly hard to find – check out this article introducing the concept of the survey.)

Well, the results are in, and they’re pretty darn interesting – but not all that unexpected.

But before I dig into the data, I want to offer some context.

These numbers should absolutely not be taken as set-in-stone representations of the state of the indie music economy in 2021 as a whole. And the reason for that is simple: The sample size for this survey sucks.

I’m working off of 25 responses.

I’m no statistician, but I can tell you that 25 respondents can’t possibly be representative of the ~700K people who qualify themselves as indie musicians in the US census (much less the who-knows-how-many musicians around the world).

To be honest, I was pretty disappointed to only get 25 responses; I was optimistically (naively) hoping for more like 200.

And I probably shouldn’t tell you this, but as I was putting this article together, I actually thought about glazing over the sample size and just sharing the stats without disclosing the number of respondents. Fortunately for my soul and your sake, I quickly realized that’d be a morally awful thing to do. If you’re going to look at this data, you should know what it represents.

So, here’s what it represents: income estimates from 25 artists who are on my email list and are awesome for sharing their info.

Most artists on my email list are not at the top-income-tier of the indie music game; they’re people who are trying to grow their careers (and are often in the early stages of doing so). As a result, the segment is almost certainly skewed toward the lower end of the income spectrum.

Every one of the respondents was unsigned, and they represented a wide array of genres that covers pretty much every nook in the industry (as seen in the image below):

Nine respondents are international artists (from Canada, Norway, Belgium, Sweden, Malaysia, and the UK); the other 16 are based in the US.

So, this data is almost certainly not representative of the population as a whole – but it is a collection of 25 passionate indie musicians sharing their real-life-income information. In other words…

I think this data is the basis for some pretty interesting anecdotal insights.

Okay – with all of that said, let’s dive into the numbers. Based on this survey:

That’s not much at all. But, sadly enough, it probably overstates the reality for most musicians.

If you take the median from the responses, you’re looking at ~$2,500. That’s because the average is heavily offset by the few artists who earn more $30K from their music (only three out of the 25).

The following graph offers a fuller representation of the numbers: 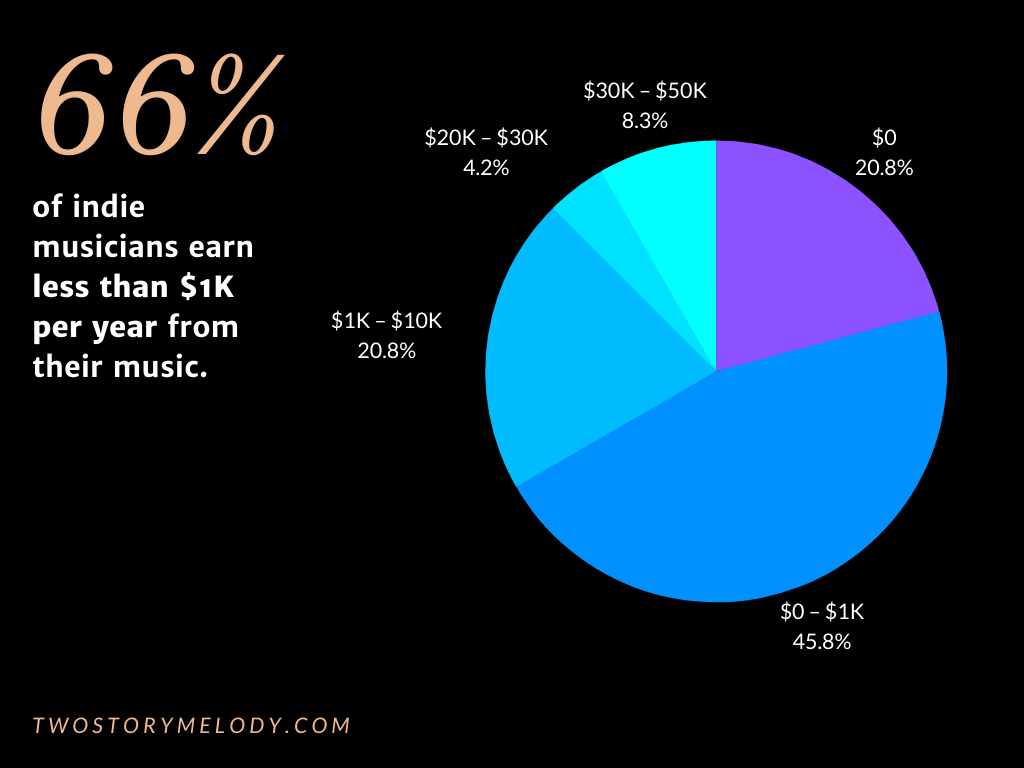 How much indie musicians earn annually

Is all of this a little bit sad? You bet. But it kind of underscores what I’ve been telling people for a while: If your primary goal is to make money, you should not be an indie musician. There are like a million other things that have far more earning potential.

It’s only worth being an indie musician if your primary goal is to make music.

Okay, let’s break things down a little further and look at how musicians are earning an income.

This is where things get even more interesting.

In my survey, I asked “How are you creating income?” and listed seven potential income streams, plus an open-ended “Other” option:

As it turns out, virtually everyone (77% of respondents) is generating revenue from streaming:

But the people who report “Streaming Royalties” as their top income stream are making pennies. Check this out: 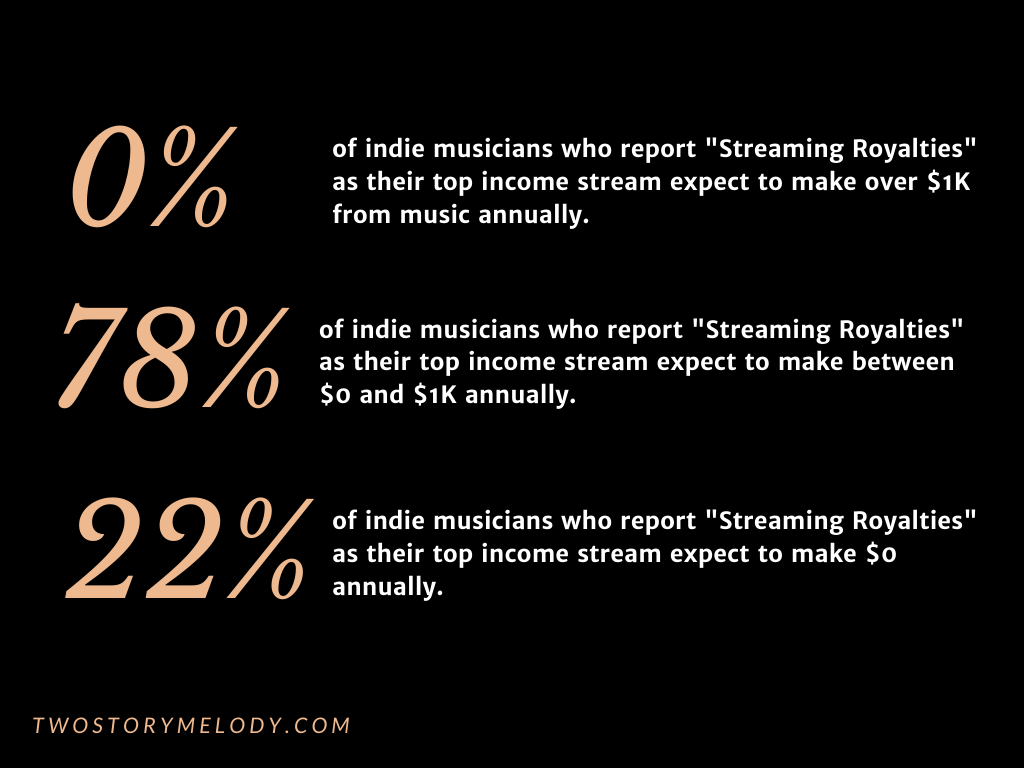 In other words, if you’re considering how you can drive more revenue from your art, the answer is almost definitely not to drive more streams.

Streams are clearly a piece of the revenue puzzle for almost everyone – but if you rely on them as your main source of revenue, it seems likely that you’ll have a hard time making any meaningful amount of money.

Instead, if you want to make money from your music, you should almost certainly focus on one of these income streams: 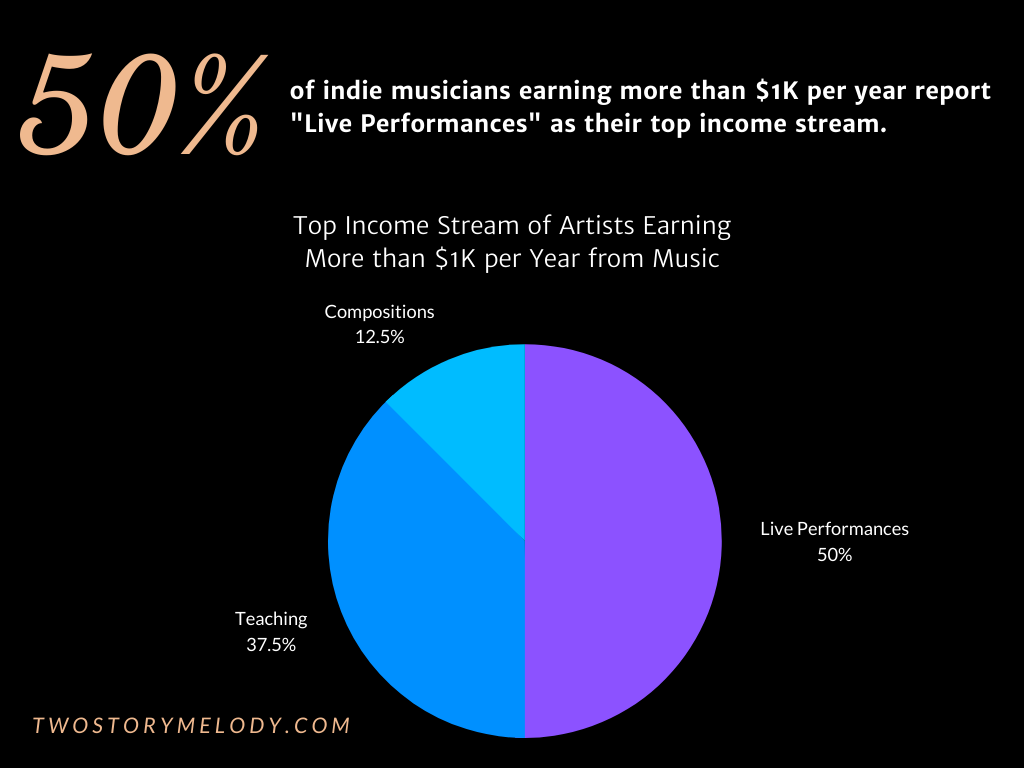 For that graph above, I looked at only respondents who expect to make more than $1K per year from their music. Out of those eight people (such a small number!), four are driving the most income with live performances / touring. One of the eight is making the most from compositions, and the final three record teaching as their primary income stream.

Interesting note here: My two highest-earning respondents each expect to make $40,000 in 2021.

One potential takeaway is that teaching may be harder to supplement with other income streams (like touring, streaming, etc.) compared to compositions. It’s easy to rationalize why that’d be the case, but given we’re only talking about two people, it’s a mostly anecdotal insight.

And, speaking of anecdotal insights, that leads me to my last stat spotlight: fan fundraising / membership income. 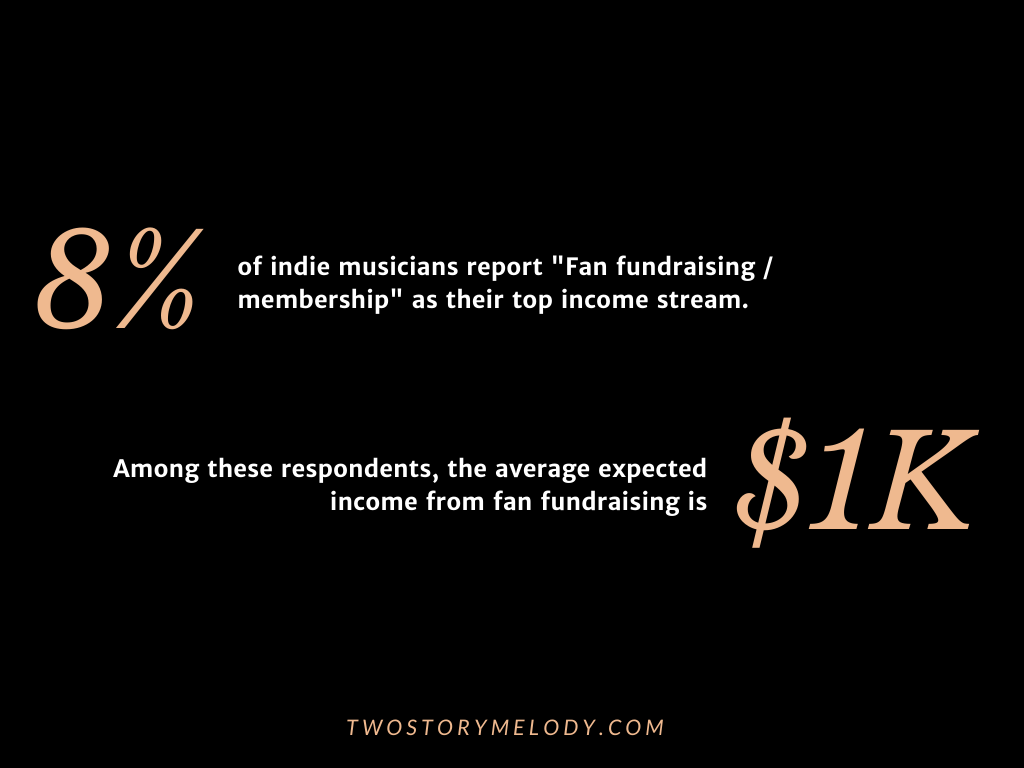 I was slightly disappointed by this, because I, like most music marketers, am a proponent of the “get 1,000 fans” concept.

The idea is that, if you have 1,000 fans paying you $100 each every year, you have a sustainable career. (As I’ve argued before, I actually think that math tends to be unrealistic, but I think the underlying principle is solid.)

But the data would seem to throw a wet blanket over the idea that you can create a profitable fan community solely through fundraising or membership. While the idea is pretty appealing, it appears most artists aren’t successfully building careers on something like Patreon (a fact that checks out when you look at the top Patreon earners in the category of “Music”.)

You can’t just create a Patreon and “make it”; you have to set up other ways fans can support you, too.

And that’s really the overall takeaway here: If you want to quit your day job, you have a lot of work to do.

You won’t be doing it alone. The census reports that there are more than 700,000 working musicians, but Statista reports that only 1,560 are full-time. If you take those numbers to be even close to accurate, then for 99% of musicians, music is not a full-time gig.

That doesn’t mean it can’t be for you. But it does mean that you’ll have to be intentional if you want to create a sustainable career.

Hopefully, this anecdotal data is helpful in giving you viable directions to pursue. Whatever path you choose, here’s to making money with your music in 2022 – and, more importantly, here’s to making beautiful music.

I referenced these articles as I was working on the survey – definitely worth checking out if you want a wider view of the market / more data.

Questions about the Artist Income Survey? Let me know here. Want to see the raw data? Here’s the Google sheet of responses.

Why Should You Submit to Music Blogs?

Contrary to its Name, “Ridicule” by An Triangles...

“Fake” by Chastity Belt Takes On the Clownery...

Andreas Moe Proves the Beauty of Simplicity in...