Aarktica on the “Delicate Waltz” and Deep Healing 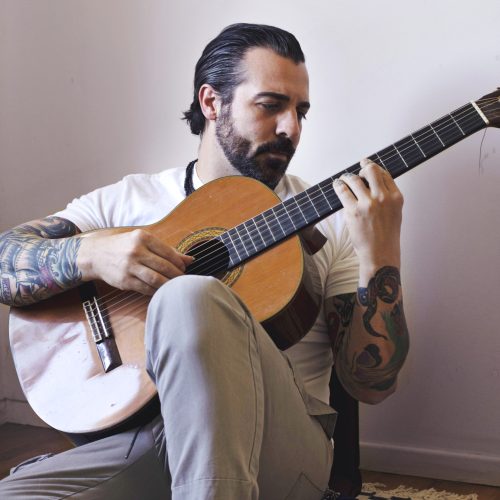 Jon DeRosa releases his ambient atmospheric songs under the name of Aarktica. While in college, DeRosa mysteriously went deaf in one ear, which forced him to recalibrate his entire sonic world.

A lot of pop songs can heal heartbreak, but Aarktica goes deeper than that. He’s a pioneer in the field of shamanic healing. He’s even covered songs by some of the world’s most revered shamanic composers, including Portuguese singer Mariana Root and Peruvian songwriter Artur Mena.

Aarktica’s new album We Will Find The Light features eleven superb tracks. “Delicate Waltz Of Shadows” has the structure of a Leonard Cohen song (with much more soothing vocals). The song opens with these intriguing lines:

I remember, when you were kind
Now a ghost, in three quarter time

What caused your hearing loss in one ear – and what age were you when it happened?

It’s a bit of a mystery, to be honest. My hearing went out suddenly, there was no incident that occurred or pain in that moment or leading up to it. It was peculiar at the time and felt like when you get water in your ear and can’t shake it out. The only conclusion after around 6 months of tests, doctors and speculation is that I had a painless ear infection, a rare but conceivable phenomenon, in which the nerves in the inner ear were irreparably damaged without any physical symptoms. The first actual symptom was the loss of hearing itself. When I found this out, I expressed my concerns to the doctor that if it could happen in one ear, it could happen to the other. He said, “You have a better chance of getting struck by lightning.”

But you know, pain is body’s way of telling you something’s wrong. I didn’t have that indicator to let me know my nerves were being destroyed by a virus in this case. Unfortunately. I was 19 years old.

How did you get introduced to shamanic healing and the music of artists like Mariana Root and Artur Mena?

I had an interest in all things metaphysical for as long back as I can remember. In grade school, I was always picking topics like UFOs and the paranormal to do my reports on. And then in high school, I got deeper into mysticism, magick, herbalism, etc, and worked in a New Age shop in my town. I read every book on every topic. I was really enthralled by it all.

But that interest kind of faded away for much of my early adulthood and didn’t really resurface until much later, perhaps until around 8 or 10 years ago. I was introduced to shamanic healing by an old friend whom I reunited with around that time. It was through him that I ended up traveling to Peru and doing my first work with plant medicines, something that would really become a very big part of my life, and continues to be.

It was at my first plant medicine ceremony in Peru that I met Mariana. I was fortunate that she was one of the musicians/assistants in attendance. I spent much of that evening outside on the mountain in the cold by myself going through my own inner warfare. But when I did manage to make my way back inside, her voice was one of the most beautiful I had ever heard. It was on that first night that she sang “Olha O Sol Que Vai Nascendo,” which became somehow ingrained in my heart. As I continued my work in this field, I began learning more and more medicine songs, traditional Shipibo songs as well as ones from singers like Mariana. I found that her songs really resonated with me more than most and I began to learn them phonetically at first (she sings in Portuguese).

Kind of the same with Artur Mena, his songs are quite popular with some singers in shamanic circles. I found a particular affinity to “Sirenita Bobinsana,” which I sang for years before finally recording it for We Will Find the Light. The original is more of an upbeat tempo with an Andean sound. In my voice and style it began to sound more like a lullaby, so it’s quite different than the original.

Larry McClain is a former ad agency blogger who writes for music and travel magazines in the US and UK.
PrevPreviousTwisting mood and soaring vocals on Nótt’s ’Frost’
Next5 Best Album Cover MakersNext