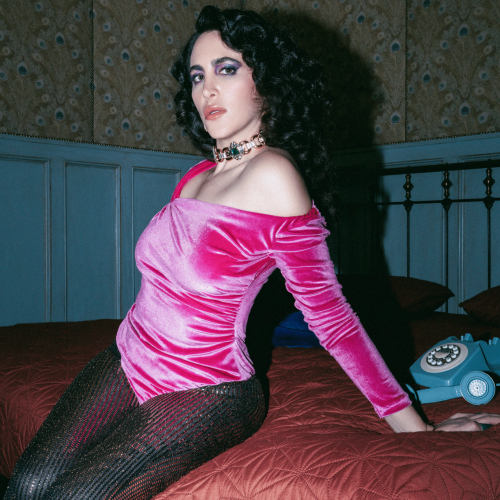 Most artists would get whiplash going from ultra-catchy dance tracks to slow-burn torch songs, but L.A.’s Ari Dayan makes the stylistic leap with ease. Her new single “Love” is a high-energy ode to self-acceptance – and it follows her previous single “Undeserving” that has the smoky feel of torch singers Julie London and Amy Winehouse. In the latter video, Dayan convincingly portrays three characters – Eve, Joan of Arc and Marie Antoinette – who all suffered for their loyalty to the undeserving.

The buoyant message of “Love” is to affirm yourself wholeheartedly, even on days that are filled with disasters.

No, I won’t get emotional today

Still got last night’s lipstick on my face

“I love you, I love every little thing about you.”

Dayan co-wrote “Love” with Aaron “KoKo” Komenski, who has penned hits for Katy Perry and others. And the video was superbly directed by actor Brett Gelman, who you’ll recognize from hit shows like Stranger Things and Fleabag.

In an era when most songs about loving ourselves are leaden or maudlin, “Love” takes you to dance heaven. Self-acceptance has never sounded sweeter.

Your new song “Love” is impossible not to love…so instantly hummable and danceable. How did you and Koko write such a fun song about a serious topic (finding genuine love for ourselves)?

Koko and I have a lot of fun together and the day we wrote “Love” was no exception. It was effortless. The songwriting gods showed up that day. We listened to my favorite disco songs and went from there.

The art direction in your video “Undeserving” is fabulous…and your dancing in the “Love” video is stellar. Did you go to art school and have years of dance training?

Diana Chire, who directed “Undeserving,” is completely responsible for the creative direction in the video. She’s a brilliant artist and it was a joy working with her. As for “Love,” movement is a large part of my artistry and it felt necessary for the song. The chaotic dancing is a love note to the muddier aspects of humanity. Messiness – it’s what I find interesting.

Any artist who can stylistically go from “Love” to “Undeserving” deserves a lot of praise. Will both songs be on your upcoming EP?

“Undeserving” was a single but “Love” is the first single off my EP. As far as the difference in emotional range goes, I was in two very different places when writing “Undeserving” and “Love.” I suppose I’m disgustingly human and my range of emotion is vast.

In the “Love” video, is that your director (and Stranger Things star) hollering in front of the dumpster?

Brett Gelman is a force and one of my favorite artists. It was inspiring working with him. He knows the ways in which I find the world funny and nurtured that in directing my performance.

Larry McClain is a former ad agency blogger who writes for music and travel magazines in the US and UK.
PrevPreviousBoost Collective Review: Is It Legit?
Next“My Kind of Crazy” by Mama Said: A Pop-Rock Ode to ParenthoodNext