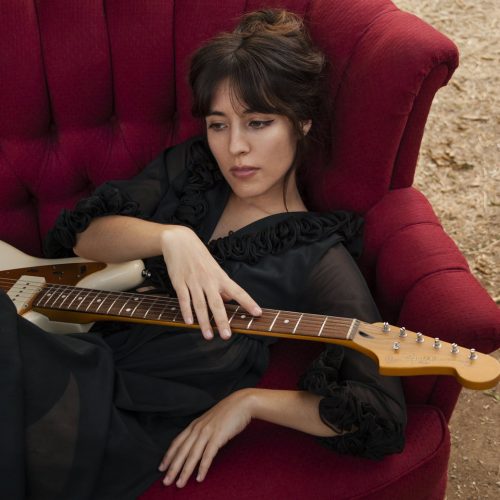 The beyond-smooth melody of “Let Go” by Chelsea Rose offers proof that today’s indie scene is a playground for Renaissance women. Chelsea is a gifted photographer and art director who also writes great songs, plays guitar brilliantly and sings in both English and Portuguese. I doubt that either Joan Jett or Chrissie Hynde could have matched that resumé back in the day.

Chelsea’s influences are so eclectic that we need another category like uber-eclectic to describe them. “Let Go” glides beautifully into Brazilian bossa nova territory, beckoning us to let the universe meet our every need. Yet her music has also been shaped by Fifties’ guitar legends like Chuck Berry and Buddy Holly. (Buddy probably shouldn’t have let the universe take care of him on that plane in 1959, but I digress.)

Rose’s guitar skills remind me of a quote from The Band’s Robbie Robertson: “Some guitarists are mathematical.” That means they let nuance and melody come to the fore instead of wearing out their picks emulating Eddie Van Halen. Even Jimi Hendrix did that on songs like “Driftin’” – and Chelsea brings that understated virtuosity to one section of “Let Go” and to her live performance of “Fallin’,” recorded pre-pandemic in Brazil.

Chelsea’s long-awaited LP Truth Or Consequences will soon be released on Paul Is Dead Records, so don’t miss “My Old Friend,” the English version of a song she originally recorded in Portuguese as “Minha Velha Amiga.”

What were the circumstances that led you to write “Let Go”? Has it gotten easier for you personally to let go?

I wrote the song a few years ago, so it’s hard to remember what was happening at the time. But letting go is something I continue to practice. In this moment it reminds me to let go of expectations and attachments to outcome, to let my intuition guide me, and to believe in myself.

Do you write songs by yourself, or do you also co-write?

I usually write by myself, but I’ve recently been co-writing and wanting to do that more.

Your music is so fluid and melodic that it’s easy to overlook your great guitar playing. Who are some of your favorite guitarists and guitar influences?

Thanks! When I first started I was heavily influenced by ’50s classics like Buddy Holly and Chuck Berry. Over the years I’ve taken in lots of influences from bossa nova to shoegaze to country. More recently I’ve been wanting to learn more jazz.

How have you been influenced by bossa nova and Astrud Gilberto? I saw a video of you in Brazil performing “Fallin’,” with your great guitar solo.

I love Astrud Gilberto! She is my queen. I can’t really explain what it is but there’s some Brazilian music that just makes my heart sing and takes me to another place. It must be the rhythms, the beautiful chords, the melodies and the language. I’ve had the pleasure of touring southeast Brazil several times and it has deepened my love for the music and the language. I have a song in Portuguese called “Minha Velha Amiga.” (The English version – “My Old Friend” – will be on my album).

Is “Let Go” going to be on Truth or Consequences and will it be released on Paul Is Dead Records?

Yes! The album has been years in the making and I’m so excited and grateful to be working with Paul Is Dead to release it!

Larry McClain is a former ad agency blogger who writes for music and travel magazines in the US and UK.
PrevPrevious“Passes the Flame” by Laura Loriga: Mysterious, Bewitching Jazz Pop
Next“Sentimental” by Pem: Dreamy, Folky WarmthNext