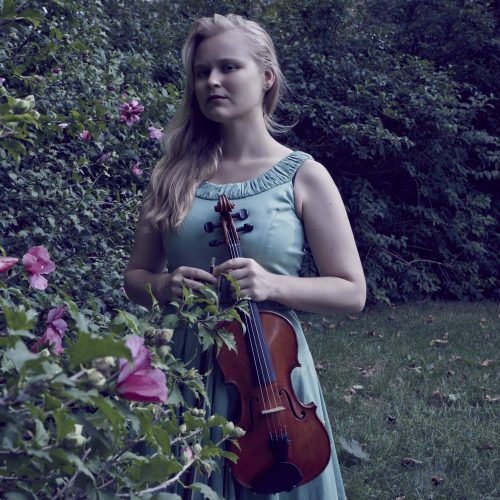 When I started listening to “Creatures”, the uncannily beautiful new song from the New York-based Concetta Abbate, it took me a few plays to realize that the plucking noise I was hearing came from a violin. It’s not that it’s an unrecognizable sound, or that it’s been slathered in effects until it sounds nothing like a violin; once you know that’s what it is, it’s obvious. I had just never heard a plucked violin used in this context before.

“Creatures”, you see, is something of a folk song; it’s not all the way folk, but it’s close. In folk, when we hear something plucked, our minds go to guitars or banjos, but it didn’t sound much like either of them. For a moment, I thought it was a harp; it wouldn’t have been unprecedented in folk, considering the success of Joanna Newsom (who Abbate cites as an influence). But then I recognized the sound, learned that Abbate is a violinist, and it all made sense. I liked “Creatures” from the moment I first heard it, but now I loved it.

As I mentioned in the previous paragraph, “Creatures” is folk-adjacent, but it takes a lot of inspiration from modern classical, too. Abbate lists the contemporary classical collective Bang on a Can as an influence, as well as the avant-garde harpist Mary Lattimore. Abbate shares Bang on a Can’s adventurous spirit and light playfulness, although that’s not to be confused with naivete or a lack of sophistication. Meanwhile, Lattimore’s influence can be heard in the way the song’s light touch contrasts with the strange, uncanny musical touches that pop up throughout: an ominous rumble of bass here, a sudden panic of strings there.

These unusual elements help draw attention to the song’s lyrics, which are sensitive and introspective. “Creatures” is the first song off of Abbate’s upcoming album, Mirror Touch, which she describes as a song cycle that is “the outcome of creative collaboration between a musician/composer and women facing mental health challenges, including their struggles with self-care.” The name Mirror Touch comes from a neuro-cognitive trait that results in extreme empathy, and “Creatures” is a fittingly empathetic song.

Abbate sings in an airy, flutish voice over her delicately plucked violin, detailing inner feelings of unfulfillment and disconnect. “I only know a life that says routine,” she sighs. “I only feed it when it’s hungry.” It’s a lament that’s familiar to anyone who’s fallen into a work-related rut, only allowing themselves fun and indulgence when they can’t function much longer without it. Elsewhere, she can only offer a shrug when talking about the way New York City is changing, which just goes to show the depths of our narrator’s alienation: the only thing all New Yorkers can agree on is that the city is changing (for better or worse), but she leaves it at “who can say?” Far from an oversight, it’s a neat character detail that elevates the song.

“Creatures” reminds me, more than anything, of the old art songs I used to sing during private voice lessons. They’re not exactly folk and not exactly classical, but they’re honest, creative, and beautiful. “Creatures”, then, is a modern art song, an illustration of one woman’s psyche set to music that sings with every pluck of Abbate’s violin.

Joe is a writer, a critic, a musical omnivore, a Long Islander, and a bundle of anxiety. He's dreamed of making a career as a writer since he was a child, which explains why he didn't dream of something a little more practical.
PrevPreviousLlynks’ “Rise-Fall”: The Highs and Lows of Love
Next“Still near” by Remington Super 60: Breezy, Pleasant Indie PopNext