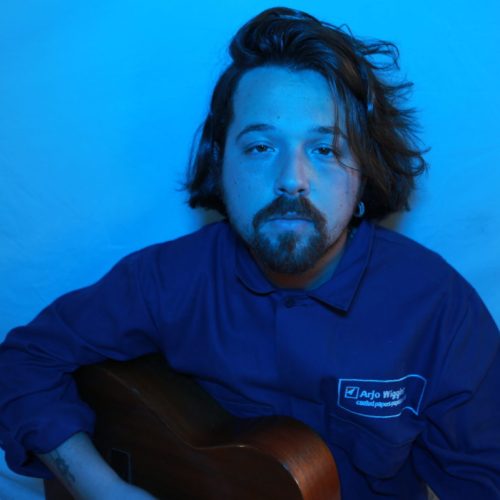 His latest single “Comfort Inn” features a Wilson-esque tempo change – and last year’s “I Wanna Die With My Blue Jeans On” has an impish Nilsson-y charm.

Fairhazel’s “Save The Planet!” reminds me of 10cc and Blur – two of the best British bands ever. He’s managed to absorb the influences of musical greats like Damon Albarn and The Beach Boys to create a wholly original sound of his own.

How did you get your stage name Fairhazel?

When I used to live in London, I lived very close to a street called Fairhazel Gardens. I was looking to switch up my project name from my own name, Hugh Macdonald, to a pseudonym and my parents and I would brainstorm for weeks trying to think of different names – the majority of which were absolutely awful. But then one day as I was walking to the tube, I noticed the street sign that I would walk by every day, and Fairhazel felt like a good combination of memorable, gentle and somewhat easy to pronounce for people of all languages (maybe not though).

Your songs do remind me of Nilsson, 10cc and The Beach Boys because they’re often humorous and have great melodies. Were those artists some of your favorites growing up? Any others?

Growing up, I didn’t really listen to any of those groups; however in recent years, Nilsson has become one of my all-time favorite artists and my respect for Brian Wilson and his musical mind is huge. 10cc, I am not too familiar with! My dad would play a lot of The Who and The Ramones and The Faces and I grew up on that kind of music and a lot of pop punk and borderline metal stuff, which I was obsessed with when I was a young teenager. My first ever album that I bought was a bootleg Metallica “greatest hits” from a Bangkok street vendor!

Why does “Comfort Inn” have a Brian Wilson-like tempo change halfway through the song?

I had these two ideas for a song, which are the two different parts you hear in “Comfort Inn” and I couldn’t finish either idea. Nothing seemed right, and continuing each section with more repeats of the same structure was not sounding good to me. I passed on the song to Kevon Scott, one of the greatest saxophonists alive today, and he added tracks all the way through. I took one of his takes and played around with the timing and pitch and chopped it up so it creates that descending chromatic chord thing that bridges the two sections. I kind of threw the second section in after that and I loved how it all came together. I like songs that surprise you.

On songs like “Hell Is Only Hell,” you seem to have a love/hate relationship with Los Angeles. What’s your opinion of The City of Angels now that you’ve lived there for a while?

L.A. is great. As a foreigner in America, it’s like stepping into some weird film that you get to live. However, surviving as a musician and making money while not sacrificing musical integrity is a challenge. Being surrounded by a lot of music industry drivel and rubbish is tiring and can throw you off course on what really matters – which is music, life and happiness. You can easily be made to feel like what matters in L.A. is branding, Gucci socks, and how busy and successful you are compared to your peers. I don’t care for that part of it at all. When I went to Sweden recently, it was such a breath of fresh air because people were so reserved about their success. Even if they had been involved in huge international projects that had won a million awards, they wouldn’t brag or even mention it. In L.A. you have to prove yourself to everyone you meet and show that you are doing so much and know so many people. However, I think it’s awesome as a hub for creative people from all walks of life, and I am very thankful for all the opportunities that have come my way thanks to living here.

Larry McClain is a former ad agency blogger who writes for music and travel magazines in the US and UK.
PrevPreviousKyshona on “Out Loud” and Music that Heals
NextRetrospective Review: Alice in Chains Unplug and Narrow a Chasm on “Brother”Next