Here is a list of three things that Gregory Ackerman’s song “Seasonal Living” reminds me of. But don’t worry—I’ll explain myself.

1: Brick walls. Specifically red brick walls, splitting down the middle, and the way it feels to run your hand up the cracks that look like a spiderweb.

“Seasonal Living” opens with a fairly subdued series of guitar plucks. The song takes ten seconds to stretch, to breathe, to lure the listener in. Then, just as you sink into the sound, the guitar breaks open. The listener is flooded with a gritty, passionate electric solo. And, like the branching cracks in a brick wall, the song only expands and complicates from there.

2: Sleeping with your window open, so you can hear the cars blaze by. That sense of comfort and togetherness, even as you lie in your bed alone.

“Highs and lows where I wanna go,” Ackerman sings in the first verse. “Tell me what you want to know; you’re surrounded.” His vocals are strapped in several layers, granting Ackerman’s voice a sense of depth and richness. We can hear both Ackerman’s high and low registers, blending together in a way that feels simultaneously crowded and lonely. And isn’t that how it feels, to hear cars outside your window? Like you’re alone, but also a part of something. “Cuz I’ve been meaning to get away,” Ackerman continues in the following line. “Maybe rest my brain in a fountain.”

3: The last day of high school. Bursting with possibility, tingling with a latent terror.

You can feel the tension of the in-between throughout “Seasonal Living.” The title itself suggests a time of change, a shift in identity that is predicated on the season. It’s the perfect track for autumn. The soundscape is appropriately stormy, like the first cold day in September. So bundle up, and reminisce. Who were you this time last year? How are the seasons changing you? “Cuz I’ll be your reason to live through the seasons again,” Ackerman croons in the chorus. “Your reason for knowing which way the wind’s blowing, my friend.”

“Seasonal Living” is a twisty, layered track that somehow both comforts and unsettles me. Each chorus is punctuated by a gritty guitar break, and each guitar break is mediated by the cooling, hypnotic tones that follow. Ackerman is an artist to watch, and “Seasonal Living” absolutely deserves a spot on your autumn playlist. The track is best enjoyed with a cup of hot tea and the windows cracked open—even and especially if it’s freezing out. So don’t be shy. Pull up the song, and let the cold in. It’s that perfect season. 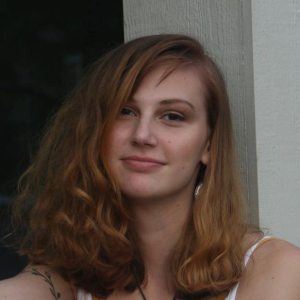 Kelsey Day is a young independent writer studying in Boston, MA. Her work has appeared in literary journals such as The Emerson Review, Stork Magazine, Blindcorner Literary Magazine, and the NC Poetry Society. She was also awarded first place in the Serendipity Literary Agency’s 2018 Discovery Contest.
PrevPreviousGrimson on “Chimney Sweeper” and its Ambitious Animated Music Video
Next“SUNSHiiNE” by Oberhofer: Swooning, Pure-Hearted Psych PopNext