Grimson on “Chimney Sweeper” and its Ambitious Animated Music Video 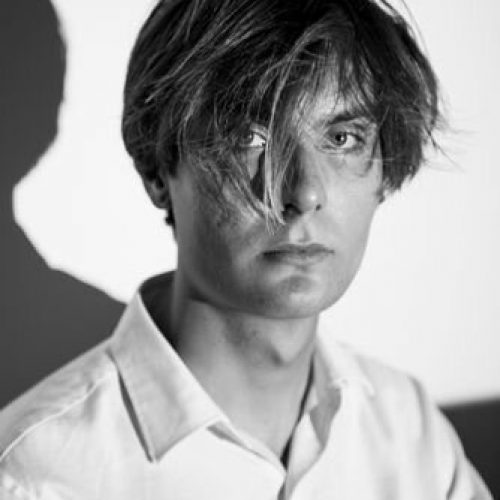 The music video for Grimson’s new song, “Chimney Sweeper,” is as ambitious as the song itself. Rows of cute kids-drawing people sway cheerfully from side to side before morphing into Russian nesting dolls; footprints track playfully across the screen in time with a bass solo; streaks of primary colors flash across the screen during the song’s psychedelic climax. It’s a perfect match for the Swedish-American artist’s new psych-pop odyssey, the stark black and white animation bringing his song to life with endless whimsy and imagination.

As it happens, Grimson made the video himself, which goes to show how completely he’s realized his vision. You can hear influence from Bowie, Nilsson, and the post-LSD Beatles, but here’s another name for you: Pink Floyd. The fanciful imagery and hairpin turns bring Syd Barrett to mind, but there’s a world-weariness to it, too, an existential ache not far removed from The Dark Side of the Moon. Like all good artists, however, Grimson synthesizes all of these things and makes them feel distinctly his own.

The title comes from a line right before the climax, where Grimson and a female backing vocalist sing about climbing up a chimney, past cobwebs and coal dust. It’s a great metaphor, especially following the evocative lines about “coughing up my sanity/down beneath the Christmas tree.” You feel as though you’re someplace you shouldn’t be, and the only way out is to climb up, up, up, past the dust and grime, in hopes of seeing the blue sky.

What’s the story behind “Chimney Sweeper?” Was it inspired by something in your life?

Chimney Sweeper was an exercise to see what kind of music I could write. I was 17 at the time, just finishing high school where I was forced to be in competition with lots of other talented songwriters, and wanted to explore theatricality and multi-disciplinary art. The lyrics were exaggerated, but came from a sincere place – confronting social dynamics, anxiety and depression, a life away from family supervision. Most of all, though, I wanted to emulate my idols like Bowie, The Kinks, etc.

I can clearly hear the influence of ambitious songwriters in the past, like David Bowie and Harry Nilsson. How do you make these sounds your own so successfully?

Shocking! Haha – yeah it’s hard to get into the headspace of when I wrote it, because I was so obsessed with replicating what I loved – the sound of 12 string guitars and dramatic chord changes. I’ve always loved music that surprises, and songs that can be appreciated both musically and technically. Bowie and Nilsson both did that with precision. For my own songs, I like to get an energetic reaction – and because I’m not the most operatic singer, I tend to do my little tricks in the music itself. Often it’s confusing, but sometimes it creates something magical.

The video for this song is just stellar. Tell me a bit more about the process of making it?

Around the time I wrote the song my mom showed me a film by Michel Gondry (famous for the White Stripes/Radiohead/Massive Attack music videos) called “Is the man who is tall happy?” It’s a disorienting documentary/interview with Noam Chomsky, but the most captivating part was definitely these scraggly hand-drawn animations all shot on a 16mm camera. I forgot most of the film, but the animations really stuck with me.

I started studying film at school and used one of the class assignments for a 16mm shooting/editing class to animate the whole song exactly how I pictured it. My teacher told me explicitly not to make a music video, but I did it anyway because I couldn’t think of another chance I’d get to spend that much time (5 months?) on a song animation, with my own personal 16mm Bolex camera. It just felt like a perfect marriage of everything I’d consumed and spit out and could do creatively. He ended up being happy that I ignored him. I ended up taking down the video a few years ago so I could re-work it, and now that I had the time and resources to record it properly, this is kind of version 2.

Most of the work happened in the 48 hours leading up to the deadline – when the rolls of film were sent to be processed, and I pulled an all-nighter to finish the drawings, and then spent 4 hours in a room the size of a closet to photograph each frame. But – the whole time I knew I was working on this project for myself, and for my music, and not for school, which motivated me to be obsessive and put so much time in.

What are your hopes for the future?

I moved to Berlin two and a half years ago to try and do music full-time. Since then I’ve been lucky enough to meet some great musicians and visit some beautiful recording studios. The goal is to start touring as much as possible, and get out a lot of the songs that have been piling up for years. Every time I release a song, it’s a little less weight on my shoulders. I would love to make more videos too – but maybe pace myself a little better than I did for this insane animation.

Joe is a writer, a critic, a musical omnivore, a Long Islander, and a bundle of anxiety. He's dreamed of making a career as a writer since he was a child, which explains why he didn't dream of something a little more practical.
PrevPrevious“Psycho” by small town sci-fi: Accepting What You Cannot Change
NextGregory Ackerman’s “Seasonal Living”: Evocative Autumn MusicNext