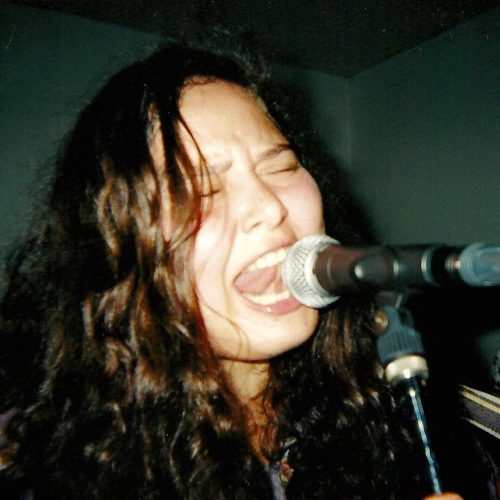 “Handsome Ugly”, a beautiful, poignant new song by Hannah Lee Thompson, features a queer relationship, but it’s mostly about the narrator’s feelings of inadequacy and self-doubt. The narrator is clearly happy to be in this relationship, but they still can’t shake the feeling that they’re not good enough. “She is handsome, and I am ugly,” Thompson sings, in a warm voice free of affectation. “I don’t know how I got this lucky.” Eventually, she shrugs and admits she may never know: “C’est la vie/It’s lost on me.”

In “Handsome Ugly”, love doesn’t wipe away insecurities; rather, it amplifies them, and maybe even creates new ones. It’s a complex, thorny sentiment for any love song, let alone a queer one, but it makes perfect sense. Queer people live in a society that continually implies that they are worth less, or even completely worthless; that’s something that stays with you, whether or not you find love. But in the song’s gentle, loving sound, there’s no question that, despite the insecurities and doubts, this love is worth it.

We’ll start with a basic question: what was the inspiration behind “Handsome Ugly”?

Handsome Ugly is one of the few songs I have that isn’t really based on anything in particular. It’s more a combination of relationships I’ve had or been a witness to.

Women artists are often assumed to be singing “confessional” lyrics even when they’re not. How often do you mine your personal life for your music, and to what degree?

My sister once schooled me when I tried to claim that I write personal songs, not political ones, because we are all products of our environment and it’s impossible to separate that from our personal experiences. That being said, I’m not someone who can write about things unless I’ve experienced them. I’m always jealous of people who can get their inspiration from stuff  like nature or other art. My process is more like: go through something, process it for a few months, then write about it. Once you have the initial idea down though, it’s important to me to edit it from a perspective of “how do I make this a better song”, as opposed to “how do I best represent my personal narrative”.

The indie rock scene has seen thoughtful, lyrics-driven artists like Phoebe Bridgers and Big Thief achieve a great deal of success. How would you say the indie scene is different now from, say, ten years ago?

In the 2000’s all of a sudden you had the ability to record hundreds of tracks per song with the development of DAWs, and as a result you have bands like The Flaming Lips or Bright Eyes creating really orchestral rock albums. Now it feels like there’s a movement back to basics, like Big Thief recording Two Hands live, or Mac Demarco making his records at home on a reel-to-reel.

How has the pandemic changed your plans going forward?

I do live sound as a day job, so I’ve had a lot of time on my hands. Like a lot of people in the music industry I’m still sort of in limbo of how to adjust. In the meantime, I’m building a chicken coop with my roommates and making a lot of cassette demos. I haven’t gotten to the point where I think it’s time to start considering a new career, so right now the plan is to keep my fingers crossed for a vaccine. It’s not great.

What are your major ambitions going forward?

I want to write songs that I can be proud of, but I’d be lying if I didn’t say I also want a chance to be heard by more people.

Joe is a writer, a critic, a musical omnivore, a Long Islander, and a bundle of anxiety. He's dreamed of making a career as a writer since he was a child, which explains why he didn't dream of something a little more practical.
PrevPreviousNan Macmillan’s “Walk the Dog”: A Gentle Reminder to Live in the Present
NextExploring What Makes Life Sacred with David James Allen’s “In the Hour of My Life”Next