“Heaven” by Begonia: A Breezy Song about Afterlife Uncertainty 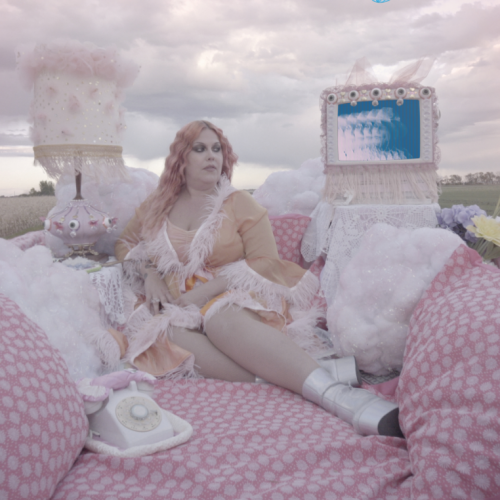 I think about death too often. I don’t like dwelling on it, but the thoughts come all the same, popping up in quiet moments and poking me like a bratty kid. Hey! Hey, you! You’re gonna die someday, y’know that? You’re gonna die, and you’ve got no idea what happens next, do ya? Do ya?! And I try to swipe those thoughts aside and think about something else, but no matter what I do I feel the death thoughts prodding at my mind.

Because I am going to die someday. Hopefully it won’t happen any time soon, but it’s going to happen at some point, and I only have so much control over when. And I have no control over what happens after I die. Is there an afterlife? Did the Christians get it right? The Muslims? The ancient Greeks? Is there a God? What does He look like? Is He even a He at all? What if I go to Heaven and God turns out to be acclaimed character actress Ann Dowd? It’s highly improbable, but is it impossible?

Or what if there isn’t anything at all? What if I die, and my consciousness pops like a soap bubble? What if I can’t even call what comes next oblivion, because oblivion implies that there is someone there to experience it? What if I simply stop existing? There are people who find the idea of eternal sleep comforting, but maybe I’m too egocentric for that; I can’t think about it for more than five seconds without my stomach hurting.

Alexa Dirks, the Canadian indie pop artist who performs under the name Begonia, has been preoccupied by these thoughts, too. In a statement accompanying her airy, gorgeous new song, “Heaven,” Dirks talks about how, when she was younger, she was unsettled by heaven and hell: “I had a lot of fear of screwing up and a lot of fear of the unknown.” As someone who grew up quasi-Catholic, I can relate: the idea of Hell terrified me, but so did the idea that there wasn’t Hell. Eventually, she says, “those binary ways of thinking have been more or less shattered,” and that inspired “Heaven.”

“Heaven” is a song about weighty subjects, but what I like most about it is that it doesn’t sound weighty. Dirks doesn’t lay it on too thick: the melodies and rhythms are as light and airy as meringue, and her soulful, R&B-inflected vocals strike the perfect tone. She sounds thoughtful, but not tortured. The production hints at the sublime, with a harp-like arpeggio and occasional half-second snatches of ethereal strings, but they remain hints, mirroring Dirks’ lyrical uncertainty.

“I’m sinking deeper into the habit again/I thought that I had been released,” Dirks sings, and while it’s never clear exactly what this habit is, it’s obvious that it alienates her from the rest of the world. “I’m on the road but this time I’m not going back/I won’t be so easy to reach,” she says, before shrugging: “I guess that’s the way it has to be.” In the chorus, she looks to the next life for solace, but even then she’s not certain if she’s on the right path. “If I get to heaven, will I be free?” she asks, a question that the song leaves pointedly unanswered.

“Heaven” doesn’t slam the door shut on belief; it takes an agnostic, rather than an atheistic, approach. Dirks sounds more than happy to “get down with the angels” if that’s what the world has in store for her. But she realizes that she’s not going to get an answer in this life, and “Heaven” is the sound of her becoming blissfully at peace with that. It helped soothe my own death anxiety, and it may well do the same for yours.

Joe is a writer, a critic, a musical omnivore, a Long Islander, and a bundle of anxiety. He's dreamed of making a career as a writer since he was a child, which explains why he didn't dream of something a little more practical.
PrevPreviousLack the Low on “The Sharpest Knife” and the Yin-ward Lean of Her New Album
NextVaca Sagrada on “Border Song,” Cormac MacCarthy, and Their Cinematic SoundNext