Jade Jackson on “As You Run” and the Roots Rock Renaissance 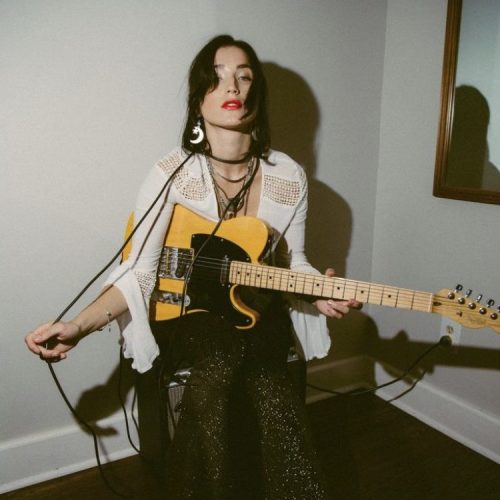 If you’re wondering where to find the next Rosanne Cash, look no further than roots-rock artist Jade Jackson.

In the late 1980s, Rosanne Cash and Bonnie Raitt had a string of radio hits, then their type of music unfortunately fell out of vogue. Now it’s making a comeback thanks to artists like Jackson and Aubrie Sellers, who teamed up for an album entitled Breaking Point.

Jade has the depth, grit and honesty that once were hallmarks of country music. Let’s hope that Nashville reawakens to its roots and gives us more artists like Jade Jackson. And fewer songs about the Applebee’s menu.

The L.A. Times reported that you grew up in a house with no TV, but an amazing collection of classic country albums. Did you ever complain about no TV, or did you get used to it?

I didn’t know any different when I was little. On special occasions my folks would walk my siblings and me to the video store a few blocks from home and we’d rent a small box TV and each pick out a video. I noticed most kids at school bonded over favorite cartoons, video games, etc., which made me feel somewhat left out, but never enough to complain. I love that my parents encouraged us to use our imaginations for entertainment, and had us play outside as much as possible. If I ever have kids I’d like to do the same.

What was the best thing about growing up in the central coast of California (besides less traffic and smog)?

I LOVE the central coast and intend on moving back someday. Growing up in an area with seemingly endless hiking trails and beaches was a gift! However, the best part about it was being with my family and having the privilege of serving our community alongside my mom, dad, sister and brother at our small family restaurant.

How autobiographical is your song “As You Run”?

My little sister and I have always shared a special bond and deep, indescribable connection.  For example, when either of us are in pain or trouble, the other will sense it and often feel it too, even from miles away. A few years ago my sister got tangled up in a relationship I knew I couldn’t protect her from. On a specific night when she left the house I felt overwhelmed with dread, reached for my guitar and let the lyrics and melody pour out of me, all for her.

You had a serious hiking accident in college. Does that interfere in any way with your touring, or have you completely recovered physically?

I fell off a rope swing and broke my back while visiting a movie ranch in Santa Clarita. At first I was worried the chronic back pain would make touring impossible, but over the years I’ve discovered the strength the accident instilled in me mentally is far more valuable than physical wellness out on the road. So though I still experience chronic back pain, it doesn’t weigh me down. It also gave me a great perspective. Knowing I came close to never walking again makes it easier to travel long hours in the van because at the end of the day I know I can stand up and walk. And the  gratitude I feel for that always outweighs anything worth complaining about.

Many mainstream country songs today sound like an AI program randomly combined words like “truck, backroads, whiskey.” As streaming slowly replaces radio, do you think it will level the playing field between Americana music and mainstream country?

Well, I sure hope so. I was raised on old country artists like Hank Williams, George Jones, Buck Owens, Tammy Wynette, etc. They were all big stars in their day, but the pendulum has taken swing to the opposite side. At least that’s what it feels like when I hear a pop country song. I believe  artists like Jason Isbell, Nikki Lane, Charley Crockett, Tyler Childers, Sierra Ferrell and Lily Hyatt, to name a few, are helping push the pendulum back towards the Johnny Cash era.

Larry McClain is a former ad agency blogger who writes for music and travel magazines in the US and UK.
PrevPreviousHow Much Does Spotify Pay Per Stream? (2022)
NextThe Smoky Sounds of Jake Rozier’s “Cigarettes”Next