Joe Pope and Luna Keller on “Barricades,” Collaboration, and Their Futures 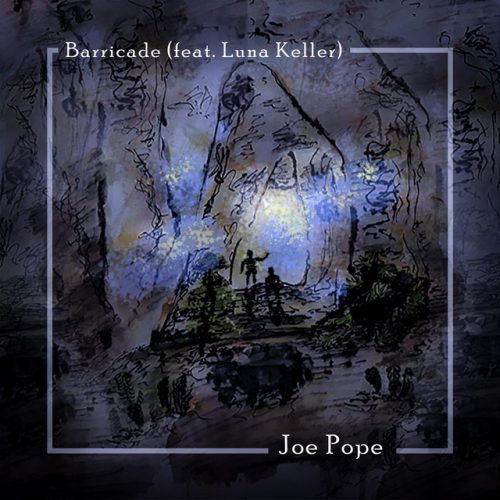 “Barricade,” a new song by the Georgia-based singer-songwriter Joe Pope, has a warm and welcoming sound, but it never feels too easy. Perhaps it’s Pope’s voice, which has enough grit to add some texture to the sound; perhaps it’s the song’s structure, which never quite goes where you expect it to go. Whatever the case, it does a great job at holding the listener’s attention: catching the ear is paramount to even the simplest folk song, and “Barricade” draws the listener along its own winding path and makes them interested in what happens next.

The lyrics of “Barricade” aim for a certain sweeping generality: encouragement to “hold on,” reminding us to appreciate the little things, reassuring us that Pope is on our side. It’s the sort of thing that could fall flat without good musical ideas to back it up, but luckily for us Pope rises to the occasion, along with Luna Keller, whose soulful, raspy vocals make her verse towards the end of the song crackle like fireworks. It’s the kind of music everyone could use more of these days: something warm yet lively, peaceful yet never static.

Tell me about the inspiration behind “Barricade.” Is there a story behind it?

Joe Pope: “Barricade” is a bit of a reaction to the ways people react to the pandemic, and to recognize that we aren’t quite there yet… you know, to the light at the end of the tunnel. It’s also a little about the political divisions in our country and how it seems we’ve lost our way. But the deeper message of the song is about holding on the those we love, and that we can get each other through.

Luna Keller: When Joe played me the song I loved how it didn’t take a political side, instead it sided with love and unity. The division we see in the world right now is hurting a lot of people and if we listened to each other more I think that a lot of pain could be avoided. While writing the lyrics for my part I tried to focus on that message: these times are confusing but there’s a truth that can guide us through it, and that’s love. Sounds cheesy but it’s always been true.

You count 70s singer-songwriters among your influences, but your music isn’t derivative at all. How do you keep your sound fresh even as it takes inspiration from that sort of music?

JP: Well it’s true, I do find my foundation in bands like America, Crosby, Stills and Nash, Gerry Rafferty and Paul Simon – with their clear acoustic riffs and lots of really subtle nuances. I don’t use a lot of digital tools, or loops. I try to keep it really clean and about the craft, and I’m always learning. But I count young indie artists of today as my current musical inspiration. I try to blend a little from both worlds in my compositions to create something really new and but faintly reminiscent of that time. I also love newer mainstream artists like the Lumineers and Nathaniel Rateliff. I think my sound comes from lots of places.

This song has some excellent arrangements. Did you have any particular feeling you wanted to evoke with them?

JP: Thank you, that honestly means a lot to hear. I actually wrote the musical arrangement first. The guitar is tuned down a half step which gives it a slightly deeper tone, and I wanted the cello to kick it off which gives it almost a sad undertone from the start. In Luna’s section (which she wrote the lyrics for) I added a percussive guitar pattern which brightens it a bit. The arrangement to me felt like it had a “touch of despair laced with hope”.

What was the collaborative process like with Luna Keller?

JP: She is just an amazing person in general as well as one of my favorite young folk artists. When I finished my first mix with “Barricade,” there was a solo portion that I thought needed something really unique. I’ve actually sent songs to Luna before just to get her thoughts and her feedback has always been so open and honest. I was so happy she agreed to collaborate with me on “Barricade.” My initial reaction to her lyrics were honestly a bit skeptical because I couldn’t sing it in my head just reading them. But then she sang a recording into her phone and sent it to me. I just happened to be watching the news that very moment with people storming the Capitol, and it literally gave me chills. She’s an amazing songwriter. Working with her, with me in the US and her in Spain, was not only just really cool – I feel I learned a lot from her in the process. And we’ve met each other’s families, and pets… she’s a friend now.

LK: Joe is a wonderful person and songwriter, we actually met because we both have our own platforms to uplift and support our fellow indie artists. After being in touch and supporting each other for quite some time I loved the idea of collaborating. We both have different experiences and strengths and I feel like we really learned a lot from each other. I threw this untraditional melody idea at Joe expecting him to dislike it and he actually loved it – I didn’t expect that. He’s just a wonderful, open minded human being and thanks to this song I think I’m allowed to call him a friend now, which is really cool.

JP: I’m writing a series of singles that I plan to compile into an album hopefully near the end of 2021. My first album, Ebb Tide, was an accumulation of songs I wrote over a lifetime. But I feel like the newer songs are coming from someplace new inside me. I’m letting them take me where they may. I think they have all the answers, I’m just the channel.

LK: I’m currently working on several collaborations and my debut album, Prophecies and Silver Linings, to be released later this year. I’m planning to move to Germany as a full time musician this year and to play live more, once that’s allowed again. It’s going to be an exciting year for sure.

Joe is a writer, a critic, a musical omnivore, a Long Islander, and a bundle of anxiety. He's dreamed of making a career as a writer since he was a child, which explains why he didn't dream of something a little more practical.
PrevPrevious“No Sleep” by Arm’s Length: Rage, Frustration and Redemption
Next“Bad Dreams” by Indigo Sparke: Poetry Over MusicNext