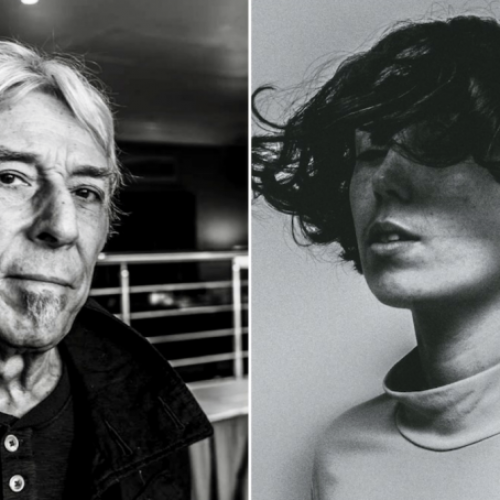 If there’s any musical hill I’m willing to die upon, it’s that songwriting is about far more than just lyrics. They are, of course, undeniably integral to the art of songwriting, which is why many of the reviews on this blog focus on thorough lyrical analysis. But if we wanted to focus solely on the words, we would be a poetry blog. We’re interested in what a songwriter has to say, but we’re also interested in how they say it: how they structure the song, how they deliver the words, how they use the music to create a mood or emphasize the song’s meaning. This approach grants more freedom to both the artist and the listener.

“Corner Of My Sky”, the centerpiece of Kelly Lee Owens’ fascinating new album Inner Song, is not a conventional song. It’s over seven minutes long, its lyrics are a series of repeated poetic fragments, and while it has a chorus the song isn’t structured around it–rather, like a cool, comforting autumn breeze, the chorus seems to show up whenever it feels like it. This slipstream structure makes sense when you consider Owens’ background: she’s an electronic producer, first and foremost, and while she frequently involves vocals and lyrics she’s more concerned with textures and mood than straightforward songcraft. And yet she tells a story all the same–with the help of a legendary guest.

John Cale is many things: a founding member of the Velvet Underground, an avant-garde violist, a solo artist who has dabbled in everything from chamber pop to glam rock, a well-regarded session musician, a composer who scored American Psycho. But for the purposes of this song, the most important thing about John Cale is that he, like Owens, is from Wales. After the two met in London, Owens sent him “Corner Of My Sky” and asked him to “tell the story of the land [Wales] via spoken-word, poetry and song”. Cale did just that, speaking and singing in both English and Welsh, even though he hadn’t so much as written the latter language in years.

Perhaps Cale was freshly inspired by the ethereal beauty of Owens’ production. “Corner Of My Sky” is a lush, hypnotic track that seems to swirl in circles like orange-red leaves swept up in a lazy wind. The gentle bounce of a downtempo drum loop serves as a base for airy, misty synth chords, and eventually the addition of Cale’s viola echoing off in the distance. It creates an atmosphere that feels both ancient and futuristic at the same time, connected to both the natural world and modern society.

Cale’s weathered baritone, then, is perfect for the song on both a musical and an emotional level. His voice, craggy yet deeply comforting with a lilting accent, adds some necessary warmth to production that could have felt cold and distant in the wrong hands. It also lends gravitas, a sense of connection to the land and its history.

The lyrics are not at all straightforward, but combined with Owens’ production and Cale’s voice they’re richly evocative of their shared homeland. They touch on the surreal beauty of nature (“the moon in the corner of my sky/is curdling in the sun”), the lives of little creatures (“the fish are rising in the creek/the foxes, in their lairs”), and the healing bliss of a much-needed storm (“the rain, the rain, the rain, thank God, the rain”).

But it’s not all pastoral calm: the moon is curdling in the sun, after all, and there are hints of danger. The history of the Welsh coal mining communities, crippled by back-breaking labor and the depraved indifference of Margaret Thatcher, is evoked with “the miners, wheezing in their holes”; meanwhile, the threat of harsh weather comes as “the weather weeps, weeps into winter”. Elsewhere, Cale merges his own hardships with those of his home country’s with “I’ll go to school, I’ll play the fool”: a shy child who spoke little English, Cale found himself preyed on by both fellow children and teachers.

And yet, there’s still dignity and beauty to the way Cale slips into Welsh as he sings. Welsh is an incredibly musical language, despite how it looks written down, and even if you don’t understand what he’s saying you can hear the history and grace behind Cale’s words. “Dechrau yn y gogledd”, he sings: I’m starting from the north. Despite decades of being a musical legend, he sounds like he’s starting a new journey, and even if he has doubts (he later sings “Beth oedd fy feddwl/Dechrau” (“what was my thinking/Getting started”), you never doubt that he’ll get to where he needs to go.

Joe is a writer, a critic, a musical omnivore, a Long Islander, and a bundle of anxiety. He's dreamed of making a career as a writer since he was a child, which explains why he didn't dream of something a little more practical.
PrevPrevious“Run Dry” by Juni Habel: A Classic Example of Folk Done Right
NextClaire Frances’ “Rabbit Hole”: A Lush, Subtle Heartbreak SongNext