Kramies on “Hotel in LA,” Collaboration, and Old Letters 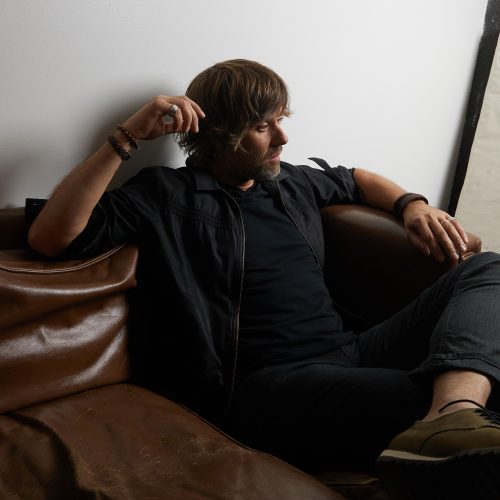 “Hotel in LA,” the spellbinding new song by Kramies, doesn’t sound much at all like the Los Angeles of our collective imagination. Even in the darkest and most cynical tales of the City of Angels, there’s always sunshine, if only to better light the terrible things that occur there. But there’s no sunshine in “Hotel in LA”: here, the skies are overcast, the palm trees sway morosely in the wind, and neon signs flicker in disrepair. Kramies creates a dense, dreamy, desolate atmosphere through his guitar work, his plaintive strumming swirling around in the mix like the Santa Ana winds. Even aside from the lyrics, this song sounds amazing: small wonder, considering the talent Kramies has gathered behind the boards for his upcoming album, including The Black Keys’ Patrick Carney and Guided By Voices’ Todd Tobias.

But despite the bleak, lonely sound, there’s hope to be found in “Hotel in LA,” bittersweet though it may be. “I was near you/and it felt good/and it felt bad,” Kramies sings, in a drifting tenor not far removed from Yo La Tengo’s Ira Kaplan. The past tense is vital to this song: no matter what the song is about, it isn’t there anymore. All that’s left are memories, but memories aren’t so bad. The song’s title comes from reminiscing on redecorating a rundown old hotel in Los Angeles, hanging up a bunch of pictures to brighten the mood and cover up the cracks and stains in the wall. It’s an artificial sort of happiness, but it’s better than the alternative.

What was the inspiration behind “Hotel in LA?”

I’ve lived a pretty peculiar and slightly eccentric life up to this point, I’ve had the pleasure of meeting a lot of creative beings and having a mountain of intuitive moments and ghostly musings. Through all of this time, I seem to have kept things that were given to me, which without knowing would circle back and inspire or push my writings.

This song was created from one of those things, an old letter, I found while moving… written from someone special who sparked a forgotten memory from years ago. I love when that happens, when something so real happens but gets buried so deep in your memory, that it talks another special little moment like finding an old letter to bring it to the surface.

The memory was about a night spent in California trying to find a hotel for hours and being so exhausted that when we found what turned out to be a very unkept hotel, it still felt like a mansion, and how we laughed that we would just cover the walls with photos and picture frames to cover the cosmetic flaws.

I love that dreamy, haunting guitar sound – how did you get it?

Thank you! I actually have one of the most brilliant & creative studio partners in the universe. His name is David Goodheim, when I first met him he played guitar with a wrench and made sounds bigger then any orchestra. He’s worked of a bunch of stuff of mine.

I actually wrote “Hotel in LA” as a demo called “Shitty Hotel in LA”. I recorded it in one take on a rusty 4-track early in the morning on my balcony. That’s why you can still hear the birds in it. I wasn’t going to use it but David heard potential and took the original demo and turned it into something huge. Then he and Todd Tobias put it together. It was one of the first times ever that I got to sit back and let it just all fall into place. Since the recording started as just me playing acoustic and singing they had to be careful not to completely drown out the vocals. It all came together beautifully. David is the mastermind behind taking my parts and vocals and building the beauty around it on this one.

What would you say is the key line in this song – the fulcrum on which the rest of the song depends?

That’s a really good question. And since it’s such a simple song I think it might actually be a whole little verse. It’s the first image I sketched out from the letter.

There’s an impressive array of talent on your new LP. Could you tell us how you went about setting it up?

I have been super fortunate in this weird business. And I’m blown away by all the cool artist that came together over the years to help me make this stuff. I’ve been doing this a long time and I’ve made a lot of friends and met some super creative humans along the way. I couldn’t have ever guessed that every one would offer to jump in. I don’t know how this sort of stuff happens but it’s like magic and timing. I think over the last nine years I’ve worked really hard and had a lot of press and that’s helped, I’ve also stayed creatively honest to my art but I still wanted outside help so I reached out to a few artists and they all said yes. It wasn’t until I started really letting go of everything and personally asking for people to work on my songs that I started really growing. It takes a village sometimes. Almost everyone on this album I’ve worked with before, or met through touring or recording. So I asked and everyone said yes. I’m very grateful.

I have some really cool mini tours coming up this autumn into next year and I’m working on another soundtrack for a book and a bunch of new singles. The projects keep showing up. But mostly traveling, staying healthy and living in a castle with my cats and some ghosts.

Joe is a writer, a critic, a musical omnivore, a Long Islander, and a bundle of anxiety. He's dreamed of making a career as a writer since he was a child, which explains why he didn't dream of something a little more practical.
PrevPreviousWhy The 1975 is Still So Good: The Value of Making Music with Context
Nextpoolblood on “Twinkie,” Influences, and InspirationNext