Ksenia Parkhatskaya on “Rose and Blue”, Russian Jazz, and the Cosmos 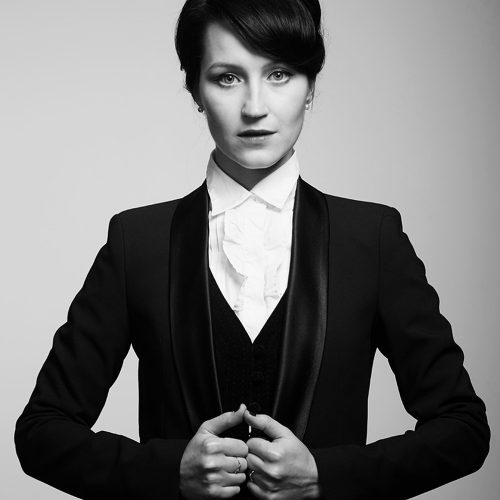 There’s something uncanny about certain kinds of jazz, something that suggests a dreamy state in between memory and the present, or this world and the next. On An Empty Bliss Beyond This World, The Caretaker (aka Leyland Kirby) famously looped and manipulated old jazz records from the 20s to evoke the failing memories of someone with dementia. “The House That Harga Built”, from Bobby Krlic’s score for the horror film Midsommar, took inspiration from Nelson Riddle’s stardust-sprinkled string arrangements. And, of course, there’s Angelo Badalamenti’s score for Twin Peaks, which used deceptively serene cool jazz to soundtrack cozy Americana as well as the mysterious and the macabre.

Ksenia Parkhatskaya, the Russian jazz musician and dancer behind the spellbinding “Rose and Blue”, taps into that tradition. The song is unfailingly beautiful: Parkhatskaya’s voice is beautiful in its sense of remove, and the string arrangements are stellar in both meanings of the word. And yet there’s still something haunting and elegiac about its sound–as Parkhatskaya explains in our interview, this is a song that’s concerned not only with the cosmos but with mortality, as well. Wherever our singer is going, you get the sense that she’s not coming back.

Still, there’s comfort to “Rose and Blue”, too: the soothing melodies, the muted trumpet solo, the warm blanket of strings. And it’s no coincidence that the song’s first line asks us to “fly to the moon”: when you’re traveling into the unknown, you take what’s familiar and comforting for solace. I bet “Rose and Blue”, with its glimmering sound and deep sense of empathy, could fulfill the same function.

“Rose and Blue” is a jazzy, ethereal song that deals with mortality. What was going through your mind when you wrote it?

I came up with the first melodies when I was playing with my husband, composer and bassist David Duffy, at the piano. Initially, I just grabbed onto the melancholy of the major 7th, while he was playing around with some 9 chords. Just the vibration of that note, its color and character brought me to this dreamy and maybe a little bit sad place. And then my mind travelled to the milky way, to waltz through cosmic gases and stars. My imagination quickly travelled far to energies, vastness…to the place of missing someone. In the middle of mumbling melodies, I understood what the song was about. It became clear that it was one more way to tell a story of my mother, Vera Parkhatskaya, and how she died.

Has your background as a dancer influenced your music in any way?

As a jazz and swing dancer, I listen to music 24/7 and I learn a lot of it by heart when I teach it or choreograph it.  Dancers who dance to jazz music need to understand music. We don’t use it as an atmosphere or a background. We really try to be an additional instrument. When I improvise or choreograph jazz music I dive into it so deep. I want to impersonate soloists, feel how he or she felt when playing out that phrase. I listen deep to hear how certain notes and songs respond in me to represent the music, to become out. I analyze their color, their emotion, their intensity. And so I suppose I learned and keep learning a lot in this process about music today.

Who would you say is your greatest musical influence?

Oscar Peterson for sure. If I need to pick one name, I don’t think twice. The freedom and virtuosity of this Jazz Maestro has been guiding, elevating, inspiring me for the last seven years. I connect to his bright soul that shines through every note.

You hail from Russia, which isn’t necessarily known for its jazz scene. Is there anything interesting about Russian jazz (or music in general) that non-Russians should know?

I will not answer for the whole country, but for my hometown. You know, for me the jazz scene in St. Petersburg is so rich and blossoming every day. We have  the Jazz Philharmonic, we have several music academies with jazz departments that bring up wonderful jazz musicians. We have several jazz bars that are open daily and where you can go for a jazz concert and then jam every single night of the week. Isn’t that spectacular!

I live in Barcelona now and it’s a lovely jazz scene here, but I truly miss the vibrant jazz life in St. Petersburg. I used to be out every night dancing to jazz, listening to it, talking about it, living in this atmosphere. If the music moved me, even if I only had three centimeters of free space for me to move, I’d get up and dance. That’s how I got to know almost all of the great musicians in my city–by dancing to their music. At pretty much every jazz jam, you’d have a line up of four or five musicians for each instrument waiting to play. And the standard is really high. Russian jazz musicians take no bullshit!

On top of it all, the audience is very sophisticated and knowledgeable as well. It’s an audience you want to play for.

I have another two singles on the way over the coming months. Again one I am super excited about with Julie Boehm, which is much more dance based. That is all leading to the album in early 2021. Aside from that I am continuing my work representing TIM [a telecommunications company] in Italy, and I am working on directing a video for my husband David’s upcoming album release, with a wonderful dancer named Aina Lanas. We shall also be releasing a new course on my online dance school, secretsofsolo.com, where Aina will be featured, called the World of Arms. So lots of things to look forward to.

Joe is a writer, a critic, a musical omnivore, a Long Islander, and a bundle of anxiety. He's dreamed of making a career as a writer since he was a child, which explains why he didn't dream of something a little more practical.
PrevPrevious“Hours” by Tomberlin: A Careful Exploration of Love and Longing
NextStar Moles’ “The Old Man’s House”: A Psychedelic AnthemNext