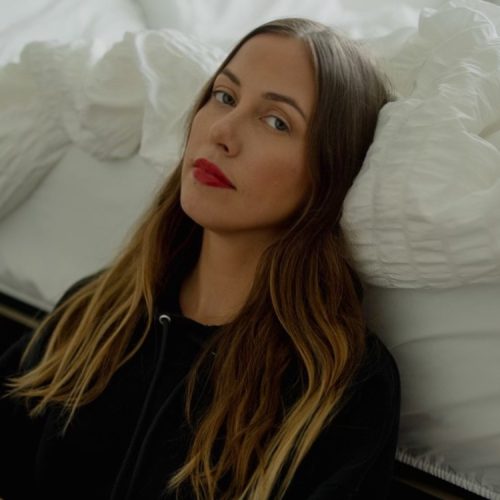 When you think of Adele, Taylor Swift and other iconic artists, they all have the ability to make you feel their pain, elation and hard-earned victories – almost as if you’re going through the emotions with them. Newcomer Leni Black has that rare gift, too.

The Nashville-based artist has a fabulous new EP with the unforgettable title i quit my corporate job for this. The EP beautifully chronicles the stages of a relationship, from early attraction (“HOW i FEEL”) to the heartache of pulling apart (“not a robot”) to the determination to grow from the experience (“Black Sweatshirt”).

Leni has lived in (and visited) more places around the globe than many touring headliners. She was a fashion industry executive in Beijing and Hong Kong for five years. And, like her screen idol Audrey Hepburn, she goes to Europe for creative recharging. Despite being cosmopolitan, Black writes songs that are ultra-relatable, even for listeners who’ve never left their hometowns.

Give yourself an early Christmas present and listen to Leni’s new EP. These songs have the Swift-like qualities to be radio hits, not just streamers.

The transition from black & white to color in the “Black Sweatshirt” video was subtle yet powerful. Whose idea was it to do that?

Thanks! That was my videographer, Brinley Larsen. I had this vision as the song played out to get more energy going and I think my videographer thought I was crazy when I started to run (because I wanted to do it all in one take). When she sent me the final versions, there was one with it going to color and I thought it was a perfect idea to capture the song’s essence! I want the listener to feel like they have gotten that much closer to getting over their ex by the end of the song.

We know that you love the movie Breakfast At Tiffany’s [featured in your video for “Sydney”]. What are some of your other all-time favorite films?

Because I would be on a plane for 15+ hours at a time, I really found comfort in old films. I’d say a couple more favorites include Barbra Streisand’s Funny Girl and In the Mood for Love, which was filmed where I was living at the time in Hong Kong. And then there’s Casablanca, which was one of my grandmother’s favorites as well.

How did you meet co-writer/co-producer Israel McFarland?

I tell him this all of the time, but I truly know he was placed in my life by my guardian angel. When I first moved to Nashville, it was prime Covid season and I joined a group which I am still affiliated with called “Songwriting Pro.” There was a Zoom call with a woman in the industry and I asked her if she had any advice for a new artist who recently moved to Nashville. Little did I know that Greyson (a fellow new songwriter) was listening. He asked to write together and said he had a friend he wanted to bring to the write. That was Israel! It was my first co-write in Nashville, and we wrote “HOW i FEEL.” I don’t know where I would be if I hadn’t met him.

You’re planning a 2023 album about your experiences in China. Will the songs be primarily personal, or will you also address the political/cultural aspects of being an American living in/working in China?

I dated a diplomat while I was in China, and it’s kind of the undertone of my entire experience there. Oddly or not oddly enough, the album is shaping into a personal deep dive into my deepest, darkest thoughts and a coming of age into my power. When I first moved there, I didn’t believe in myself and it gave me a lot of confidence to leverage once I was back home. On the album, there will definitely be references to my proud American-ness.

What music did you listen to in China?

In Asia, you mostly hear Western music. There was a moment in Hong Kong when I became obsessed with Julia Michaels’ song “Issues.” I remember reading her story and thinking how similar I felt to her. I truly never knew I could be a songwriter for a living. I think a seed was planted that day. The theme of my entire life over there was “At Home” by Crystal Fighters. Wow, I am getting so nostalgic going through these songs!

Larry McClain is a former ad agency blogger who writes for music and travel magazines in the US and UK.
PrevPreviousSun Kiss Takes Us to Paradise with “Melt Away”
NextHow to Build a Fanbase in 2023Next