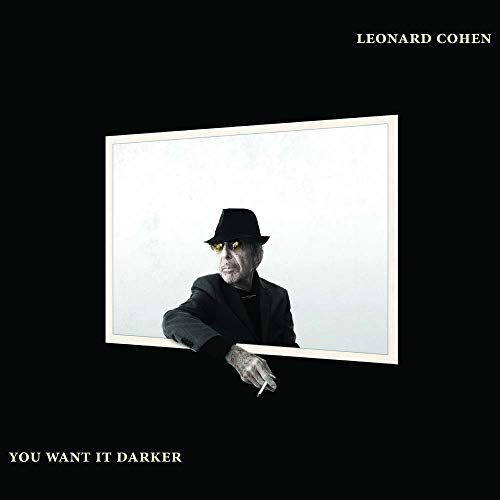 Cohen has always been an unapologetic minimalist. Visitors to his humble house a few steps from Montreal’s Rue St. Laurent have always commented on the bare walls, the bare rooms (save for perhaps a single chair or settee,) so it’s clear that he likely won’t find great pleasure in receiving gifts today.

Rather than being the recipient of today’s gift-giving, Cohen has chosen to offer the world a sizable, truly exquisite gift in releasing the lead single, “You Want it Darker,” from the forthcoming album of the same name.

Greeted by the sound of an ecclesiastic choir, the intro to “You Want it Darker” evokes an immediate sense of hallowed halls, of ancient religious tradition, and mournful quiet. By the time the sparse percussion and punchy, juxtaposed bass arrives, Cohen has already married worlds that rarely collide.

“You Want it Darker” is Cohen’s unapologetic yet humble moment of acknowledging his impending reckoning. He confidently opens his discussion with his higher power by recognizing

If you are the dealer, I’m out of the game

If you are healer it means I’m broken and lame

If thine is the glory, then mine must be the shame

You want it darker. We kill the flame.

With ease and void of singular devotion, Cohen weaves and leads through vivid imagery and nods to both Christianity and Judaism, both acknowledging his “maker” having been

Vilified, crucified in the human frame

hineni, hineni (‘Here I am’ translated from Hebrew.)

While present in the Old Testament as declared by Abraham, it is, undeniably, a Torah-acknowledging, almost taunting pledge, followed by the shiver-inducing, gravel-laden

Ready he is. Cohen seems to, in the course of four verses, both accept and call out his god, finger-wagging at some of humanity’s most shameful atrocities, such as the 1940s European genocide, claiming

A confident and sure-footed statement from a man who knows he is very near to his destined departure date. If somebody greets him at the gates, the burden of explaining one’s actions will not be shouldered by Cohen alone.

Fearless in the face of impending death, or fearful of judgment day, the emotions that have driven him to pen and deliver the lyrics as he did will remain buried in the cemetery in the Eastern shadow of Mount Royal, where Leonard Cohen finds eternal rest alongside all of his family who have walked through the gates before him.

A Canadian music lover, Iconic Photograph Specialist, and multi-instrumentalist, Jeff Wood currently splits his years between Canada and the Mayan Riviera. With a post-secondary focus on English and Modern Philosophy, he holds hope that one day artistic integrity will trump commercial viability within the popular music industry.
PrevPreviousSwiss Newcomer Pet Owner Releases the Quirky Indie-pop Banger “Hi-Res”
NextLoren Noyman is back with the soulful “Emmanuel”Next