Lindsey Lomis on “Save Your Breath,” Earning Celebrity Praise, and Performing with Brandi Carlile 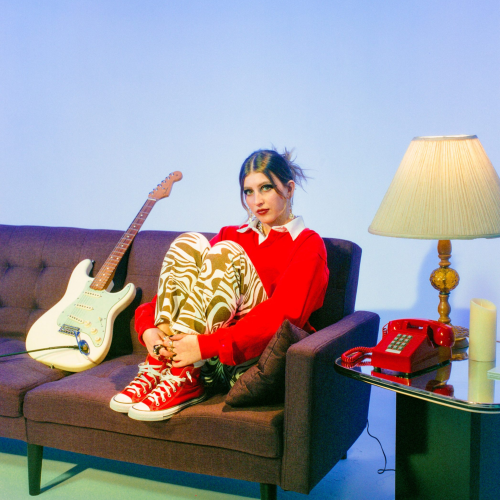 When a female artist has a beautiful, bluesy voice and plays electric guitar really well, the obvious comparison is to Bonnie Raitt. In my opinion, the person most likely to claim Bonnie’s throne is Lindsey Lomis, a Nashville-based artist who’s only 19.

Lomis’ new song “save your breath” chronicles her encounter with a young Adonis who looks fantastic but isn’t exactly a Rhodes scholar. “The song is about someone who looks good but doesn’t have much going on in their head,” says Lomis. “It’s a fun, cheeky way of saying ‘We don’t need to talk. Let’s just enjoy the night before we part ways.’”

I don’t need to hear your take on morality

I think your opinion might ruin you for me

So keep that “easy on the eyes” personality

Lindsey’s new EP will be out in late August, then she goes on a North American tour supporting Joshua Bassett.

What’s the story behind “Save Your Breath”? Was it based on a real-life encounter?

I wrote “save your breath” about seeing someone cute that you might be interested in, then as soon as you talk to them the interest fades. They look good but they don’t have a great personality. The song is definitely based on many people I’ve encountered in my life haha!

Your indie album Chapter 1 drew praise from Shawn Mendes, Justin Bieber, Meghan Trainor and other big stars. Were you surprised by some of their endorsements?

I was soooo surprised! Still to this day I’m in shock that people I’ve grown up listening to and learning from appreciate the music I’m making. That’s probably the biggest encouragement I’ve received.

When did you duet onstage with Brandi Carlile – and was that planned or spontaneous?

I actually won a contest to sing with her in Mexico for Girls Just Wanna fest and it just so happened to be right on my 16th birthday!! I got to briefly meet her beforehand and then we just hopped on stage and I sang one of her songs while she backed me up on piano. I was so nervous and honored to sing alongside her. She is such a pro!!

Do you split time between Los Angeles and Nashville?

I live full time in Nashville (I actually just moved out of my parents’ house and got my own place!!) and visit LA pretty frequently. I love it so much out there but Nashville is such a perfect home base for me.

You recently played Concorde 2 in Brighton, England and were equally adept at singing and guitar-playing. Who are some of your all-time favorites on guitar?

Ahh thank you! Still feels unreal to say that haha. One of my major guitar inspirations is, of course, John Mayer. Two incredibly talented guitar players I actually found through Instagram years ago are Melanie Faye and Ayla Tesler-Mabe. I’m such huge fans of them too.

Larry McClain is a former ad agency blogger who writes for music and travel magazines in the US and UK.
PrevPreviousRetrospective Review: Tool’s “Not All Therapists Wear Suits”
NextYDE on “Old Her,” TV Stardom and New HorizonsNext