Lucy Roleff and Lehmann B. Smith on “In the Doorway,” Reflection, and Folk Influences 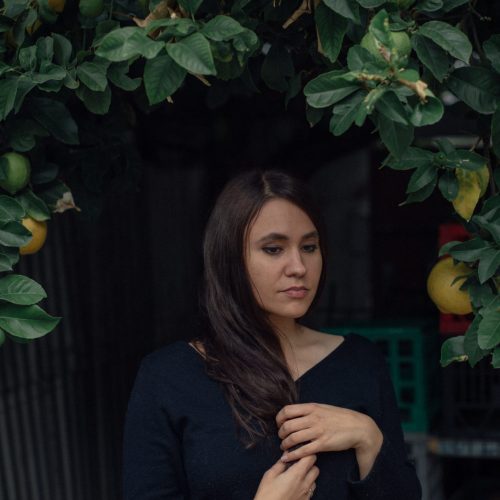 Written by the Australian singer-songwriter Lucy Roleff some time ago before being fleshed out into its current iteration, “In the Doorway” is the kind of quiet, sober reflection on lost love that’s necessary after a heartbreak. Plenty of songs have been written about breakups, and plenty of songs have been written about the triumphant rebound, but there haven’t been as many written about the in-between state of numb aimlessness. Once the angst and the pain and the screaming and the crying is all over, it’s worth looking back with clear eyes and asking yourself, without judgment, “how the hell did I end up here?”

While “In the Doorway” is a rather melancholy-sounding song, it’s not exactly sad, either; in the words of another songwriter, Roleff has no tears left to cry. She operates through understatement, her voice a dead ringer for Vashti Bunyan’s as she recalls the moment she left: “In the doorway/I took a guess/I guessed right.” But once she decides that it’s time to leave, where does she go from there? Even if there isn’t a straightforward answer, the song’s peaceful tone, and the gorgeous arrangements by Lehmann B. Smith, point to a graceful transition into the next chapter of this woman’s life. “Summer’s opened up,” after all.

How did “In the Doorway” come about?

Lucy Roleff: I wrote this song years ago, and it was originally a funny little demo that I recorded while house sitting for some composer friends who have an extensive instrument collection. I knew I wanted to flesh out the song some more and Lehmann really brought the extra thing it needed on bass, and by generally keeping me on track.

The song is essentially about those moments when one is reflecting upon a time of romantic intensity, when you’re looking over what happened and what came to be. There’s a sense that things were left up in the air somewhat, so that one goes on to sort of replay conversations and moments, looking over the time that’s passed and wondering what the other would make of the current day, the season, the light.

What was your approach when it came to arranging this song?

Lehmann B. Smith: Lucy’s guitar sort of falls over itself in torrents, it just keeps rolling and rolling along, so I just tried to stay out of its way. I had organ, cello and bass clarinet making these brief drones under Lucy’s guitar, and the odd busy bass or counter melody on piano. I guess I was thinking of the song somewhere between a raga and a shanty, with Lucy’s almost “Queen of the Night” chorus harmony chirping over the top. And if it ended up sounding like it came out of a rabbit warren that was alright with us.

LBS: We’re both big folk fans, and definitely of 70s English folk, so Bridget St John, Nick Drake, Vashti Bunyan, that sort of scene was a big inspiration for the album. Not that we really listened closely back to anything, but our recollection of it gave us an approach. We’re always trading classical tunes too, so across the album there were some sideways glances at Dvorak, Monteverdi, Bach, Rachmaninoff, Josquin Des Prez, that sort of thing. There may have been some very faint osmosis there.

Do you have any plans for future collaborations?

LBS: Now that the album is coming out we’ve starting to mumble about making another. We’re very slow though so it might be awhile. Maybe we’ll have a drumkit on this next one.

Joe is a writer, a critic, a musical omnivore, a Long Islander, and a bundle of anxiety. He's dreamed of making a career as a writer since he was a child, which explains why he didn't dream of something a little more practical.
PrevPrevious“My Kind of Crazy” by Mama Said: A Pop-Rock Ode to Parenthood
Next“Flip” by Leah Dunn: A Shaggy, Funny Triumph for Memorial Day WeekendNext