On “Walker,” Animal Collective Nails the Second Single and Pay Tribute to a Legend 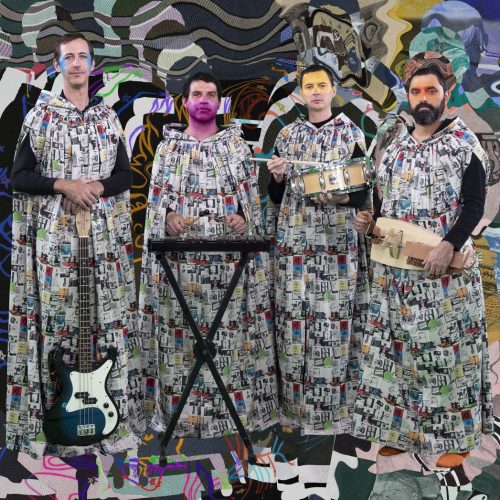 The first single is, of course, one of the most important parts of any album rollout. But just as important, and arguably more difficult to get right, is the second single. Once you’ve released the first single, shared the cover art, and sent out press releases talking about whatever life experience/artistic reawakening/ayahuasca journey inspired the album, listeners will want to know what else you’ve got. Hype built by a strong first single can be easily deflated by a second single that sees an artist reaching the bottom of their bag of tricks. Conversely, a second single can show another side of the record, a different yet equally rewarding vibe that makes people even more excited.

“Walker,” the second single from Animal Collective’s upcoming album Time Skiffs, does just that. By this point in the album cycle of their previous record, Painting With, the bloom had already come off the rose: whatever goodwill had come from the delightful “FloriDada” was squandered by the lethargic, uninspired “Lying in the Grass.” Although “Walker” isn’t quite as strong as “Prester John,” it suggests that Time Skiffs will have the variety and crackling energy of Animal Collective’s best work.

Panda Bear (aka Noah Lennox) wrote “Walker” as a tribute to one of his musical heroes, the late Scott Walker, whose singular career has become music-geek legend. He was first a member of the Walker Brothers (none of them brothers, none of them born Walker), who for a brief time in 60s Britain were as popular as the Beatles; then, he went solo, recording lush, existential chamber pop that influenced everyone from Soft Cell to Pulp. After a “wilderness period” of half-hearted record label obligations, he re-emerged years later as a howling, nightmarish figure of the avant-garde, which he remained until his death in 2019.

“Walker” doesn’t particularly sound like Scott Walker. Panda Bear’s boyish, dreamy voice has worked well for him, but he wouldn’t be able to pull off Walker’s rich baritone or ghostly tenor, and he knows better than to try. And while “Walker” does sound reminiscent of the 60s, its psych-pop swirl and tinges of exotica are worlds apart from Walker’s weighty, dramatic Scott series. But Lennox notes an “exhaustion and resignation” to the song’s narrator, “going through the motions” of live performance, faced with meaningless, unfulfilling standing ovations night after night. Walker, a private man who rejected live performance and never re-listened to completed material, might have sympathized with the narrator; he might have even written a song about him. In this way, “Walker” serves as a tribute to the artist without directly imitating him.

Musically, Animal Collective sounds stronger than ever. As on “Prester John,” there’s an easy chemistry to the way they play; they have the looseness and comfort of a jam band, but (at least here) there’s no self-indulgent noodling. There’s just a fluid dub groove, flavored with marimbas and bouncing happily beneath Panda Bear’s various hooks. It’s as promising a second single as I could have hoped for, and I’m even more excited for the full album.

Joe is a writer, a critic, a musical omnivore, a Long Islander, and a bundle of anxiety. He's dreamed of making a career as a writer since he was a child, which explains why he didn't dream of something a little more practical.
PrevPreviousShaken-Up: The Top Ten Songs by The Knife
NextCorrina Repp on How a Hug Inspired Her Hymnal “The Shore”Next