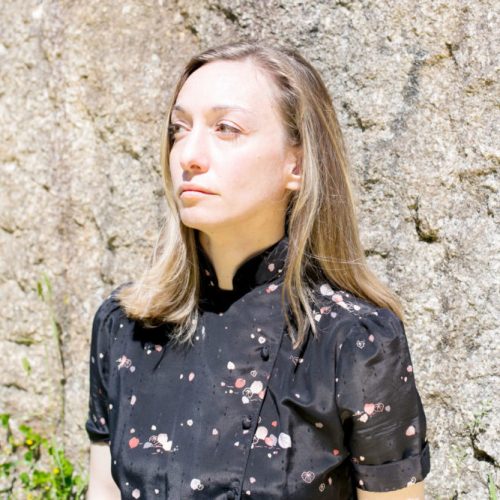 There’s a particular kind of music that’s like catnip for me. It features a vocalist, usually female, singing over rich, atmospheric, percolating jazz-pop. The mood is mysterious, but not necessarily dark; understated, but not without emotion. It flirts with the avant-garde, but while it may be dissonant it never loses track of melody. Occasionally, there is a clarinet.  The details may change, but my enjoyment does not: whether it’s Julia Holter or Jenny Hval or Fiona Apple, it’s the kind of music I can sink into like a polyrhythmic, elliptical bubble bath.

“Passes the Flame,” a new song by Laura Loriga, has that exact sort of sound, which of course means I love it. But Loriga also gives the song some striking elements that distinguish it from other music like it, which means I really love it. Unlike some other jazz-pop songs, “Passes the Flame” forgoes the typical piano in favor of an electric organ, which is an excellent choice: with its slightly off-kilter whine, it allows for some really lovely, uncanny textures that you just can’t get from an acoustic piano. There are other musical elements, too, that add to the atmosphere; there are skittering, simmering drums, as well as woodwinds that dart in and out and play with each other in the background.

Perhaps the most impressive instrument is Loriga’s voice. It’s an airy, breathy thing, reminiscent of Jenny Hval or Susanne Sundfor, but it never feels weak, and it’s never in danger of being drowned out. Loriga skates and glides her way through the dense, heady music, her silvery voice cutting crescent paths through thickets of music. “Passes the Flame” would be a lovely song even without the lyrics, but Loriga uses her words to cast an enigmatic spell on the listener.

Admittedly, the lyrics aren’t exactly straightforward. It’s more focused on creating strong, distinctive images than constructing a full narrative, even though there’s the shape of a story about the sacrifices and mystery of marriage. But those images linger longer than quotidian story beats would, anyway. A silent man writes his name with care; he may or may not be 90 years old. A woman catches a glimpse of a day that might have been, then combs her hair. Another woman smuggles hand grenades in a bushel of apples. At the end of the story, more women form a sort of Greek chorus, gathering to smoke and casting a jaded eye upon what transpired. “What’s the big deal now? What else is new?”

It’s a wonderful ending that lends this mysterious song a whiff of eternity; in the grand scheme of things, a decades-spanning romance isn’t anything new at all. But it’s the telling of the story, and the excellent musicianship behind it, that lets “Passes the Flame” linger.

Joe is a writer, a critic, a musical omnivore, a Long Islander, and a bundle of anxiety. He's dreamed of making a career as a writer since he was a child, which explains why he didn't dream of something a little more practical.
PrevPrevioustalker on “Little Bird,” Naming EPs, and Catharsis
NextChelsea Rose on “Let Go,” Guitar Influences, and Astrud GilbertoNext