Placebo Flirts with Introspection on “Without You I’m Nothing” 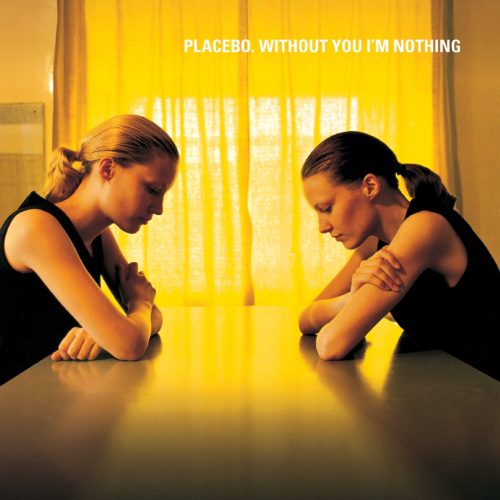 It’s 1998. Music, namely popular music, is going through a wash/repeat/rinse cycle. Gone are the turn-of-the-decade ear-opening experimentalism of Sonic Youth and Dinosaur Jr. Gone are their offspring of the seismic grunge movement. Nirvana, Alice in Chains, and Soundgarden have all literally disbanded. What follows, commercially at least, is the equivalent of accidentally adding bleach to your washing machine full of dark clothing. The result is sanitary, uninspired exoskeletons of what used to be.

In the pre-Youtube and Spotify era, one must truly dig deep while keeping their good ear to the ground in order to excavate the remaining nuggets of gold in the seemingly looted mine of creativity.

With the right tools and sufficient commitment, one just might happen upon Placebo.

Placebo’s 1998 sophomore LP Without You I’m Nothing – and namely its title track – veers far off course from their debut self-titled offering. While the 1996 debut was a crash course in overt debauchery and shameless allusions to truly embracing such darkness, “Without You I’m Nothing” offers a glimpse of slightly more mature and vastly introspective musicianship.

The song, while steeped in poetry as ambiguous as frontman Brian Molko, seems to be a reflective meditation on forecasting the perils of a blossoming relationship due to fundamental, unexposed differences in two lovers. It pours duality as smoothly as olive oil onto a cold skillet. With every acknowledgement of the potential good (or bad) in a budding romance, the coda serves as a constant reminder of the main character’s willingness to ‘take it by your side.’ A vulnerable testament of commitment or an admission of lack of boundaries? Molko may be the sole gatekeeper of this premise.

Before one can rest on the optimism and sense of healthy, borderless admiration, the song swiftly devolves into a cautionary tale, with Molko claiming that ‘oversaturation curls the skin and tans the hide’ and warning that ‘I’m unclean, a Libertine/You’ve never seen the lonely me at all’ before counting down (or up?) in a foreboding

Perhaps it’s the residue of the newly-minted rock stardom wearing off, revealing the personal trade-offs that inhabit the territory. Perhaps it’s the 1990s lack of cultural awareness of self-care and self-love. Regardless, by the time we reach the summit, the vulnerable breakthrough, Molko concisely and confidently concludes the exercise without the exhausting anecdotes and riddles, simply resolving:

“without you I’m nothing

without you I’m nothing

For a band that will, in coming years, heavily influence acts like Ladytron and IAMX, the most rewarding nod would come while Molko was on vacation in Barbados. He woke one morning to his brother shoving a telephone in his face, whispering “It’s David Bowie!” Bowie, while also on vacation in nearby Bermuda, had just heard “Without You I’m Nothing.”

“Brian. I’ve been listening to the new title track and I’ve written a great harmony over it. We should re-record and release it as a duet.” And so it is. The flaming torch is respectfully and humbly passed from the 1970s androgynous genius to the modern day greenhorn.

A Canadian music lover, Iconic Photograph Specialist, and multi-instrumentalist, Jeff Wood currently splits his years between Canada and the Mayan Riviera. With a post-secondary focus on English and Modern Philosophy, he holds hope that one day artistic integrity will trump commercial viability within the popular music industry.
PrevPreviousBami’s “I Don’t Know How to Be Alone” & Melancholy Bops
NextAustin Leonard Jones – Demon SandsNext