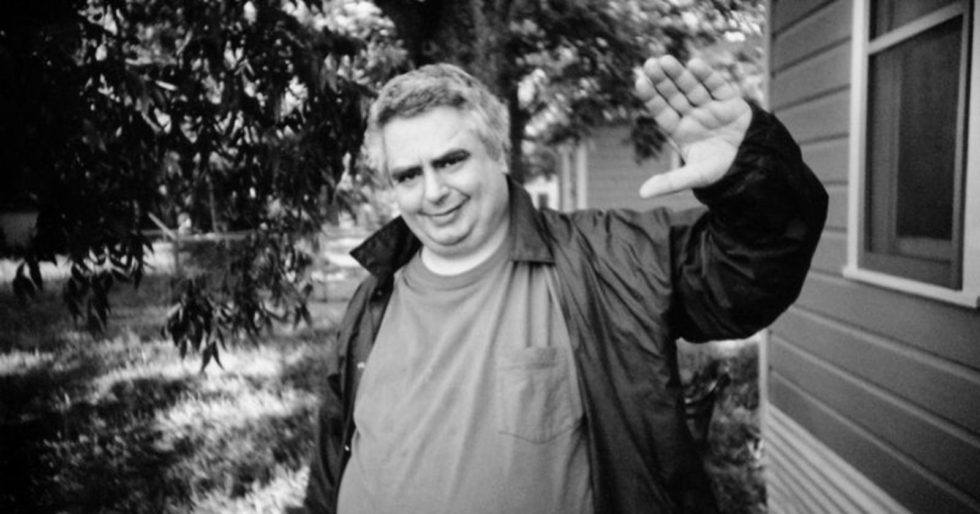 It’s tempting to follow easy narratives when you talk about Daniel Johnston. The underground singer-songwriter, who passed away at the age of 58 on September 10th, was a brilliant but troubled musician whose work was unorthodox and sometimes primitive, a familiar archetype to anyone who knows about Brian Wilson or Syd Barrett. He rose to cult notoriety after getting a big name fan in Kurt Cobain, like so many other boats who were lifted by Nirvana’s rising tide. He struggled with schizophrenia and bipolar disorder his whole life, spending much of it in and out of mental hospitals. Nevertheless, he has remained a beloved figure in alternative circles, the subject of documentaries and compilation albums celebrating his
legend. But legends don’t write songs–people do. And so, any tribute or obituary to Daniel Johnston that doesn’t foreground his strange, wonderful music is doing itself (and its readers) a disservice.

The first word that’s usually used to describe Johnston’s music is “childlike”, which is true to an extent; his songwriting favored simplicity, his musical skills were rudimentary, and his awkward, squawky voice made him sound like a permanent tween. But it’s more accurate to call his music “pure”, no matter how fuzzy the audio quality of his recordings. In his early music, Johnston was that rare artist who didn’t sound like he was influenced by anybody; listening to him, you got the feeling that he started writing songs without having listened to anyone else, and it was only through sheer coincidence that it sounded something like music as we know it. There were some trace influences of the Beatles, who he adored, but it speaks to the sheer power of Johnston’s creative vision that you forget about the most influential musicians on Earth while
you’re listening to him. Even after he began to get a wider audience and cover artists like the Beatles and Springsteen, there was no mistaking him for anyone but himself.

Here are five of Daniel Johnston’s best songs, those songs that give you the best idea of what kind of an artist he was.

The song which gave the name to a 2006 musical based on his music, “Speeding Motorcycle” rides a simple-but-effective keyboard groove as Johnston addresses his heart through the title metaphor. He tells it that it’s been through a lot (“pretty girls have taken you for a ride/Hurt you deep inside but you never slowed down”), warns it not to be reckless in its pursuit of love (“we don’t need to break our necks to get our kicks”), before finally throwing caution to the wind and following it wherever it takes him (“we don’t need reason and we don’t need logic/We’ve got feeling and we’re dang proud of it”). Johnston closes out the song with a series of cheerful “woo”s, sounding, in his own strange way, quite free.

Here, Johnston steps into the role of the wandering bluesman, following the moon from stage to crummy stage and battling the demons that live in his head (demons and the devil are a recurring motif in his lyrics–not for nothing is the documentary based on his life called The Devil and Daniel Johnston). Despite his squeaky voice and the occasional flubbed note, he manages to pull it off. Part of it is the addicting guitar riff that forms the song’s backbone, sounding like a vacuum-sealed Delta blues lick; another part of it is the song’s frantic, midnight-chase-through-a-graveyard atmosphere. “When I’m dead/I’d like to have it said/He drove those demons out of his head,” Johnston urges; can do.

“Some Things Last a Long Time” might be Johnston’s most famous song, and certainly his most covered: artists from Beck to Beach House to Lana Del Rey have performed this song, co-written with Jad Fair of Half Japanese. Although it was Johnston’s most polished recording up to that point, “Some Things Last a Long Time” is beautiful in its simplicity; it’s just a couple of chiming piano chords, Johnston’s plaintive keen, and a whole lot of reverb (as well as some odd gurgling sound effects, because Daniel Johnston was nothing if not willing to make the unsafe choice). But in that simplicity is something truly meaningful and poignant, a song about how love remains long after two lovers have drifted apart. The soppy balladeers you hear on the radio could learn a thing or two from this song.

“Hi! How aaaaare you?” Those are the first words that Johnston says on “Walking the Cow”, and they set the tone for his whole discography. It’s a friendly and well-meaning sentiment, made just a little unfamiliar through its delivery (the oddly stretched “aaaaare”, the fact that it follows a children’s toy recording of a
pig snort). The song that follows, though, shows what a sophisticated songwriter Johnston could be through all the lo-fi grit. The toy keyboard parts that Johnston plays in this song are rich and lively; check out the way it leaps up as he sings “lucky stars in your eyes”, or the chirpy solo that follows the first chorus. You could easily imagine it rearranged for a string quartet, although if you were to do that you’d need to keep the song’s sweet, simple spirit intact. The song’s central
metaphor, which Johnston got from a Blue Bell ice cream wrapper, perfectly captures what it feels like to try and make love do what you want it to do. You may as well try and walk a cow.

The period of time surrounding 1990 was turbulent for Daniel Johnston. While a record company’s backing allowed Johnston access to resources he didn’t have before, the pressures of recording the album took a toll on his mental state. In 1990, he boarded a small plane with his father to return home after a music festival, and he had a manic episode which resulted in the plane crashing. While neither Johnston nor his father was seriously injured, the damage was done, and he was involuntarily committed to a mental hospital. He and his career would eventually recover, but for a moment it looked as though he had burnt out at the height of his success.

And yet, if you listen to “True Love Will Find You in the End”, you can’t hear any of that. You can only hear the gentle strum of Johnston’s guitar, the tender-heartedness of his voice, and the beatific grace of the lyrics. Singing as though he’s speaking to you directly, Johnston promises that you’ll find true love one day–that you’ll be fulfilled, be happy, you’ll find out just who you want to spend your life with. But, he says, there’s a catch; true love can only find you if you’re looking for it. In a couplet so open-hearted and generous that I’m misty-eyed just thinking about it, he sings: “Because true love is lonely, too/But how can it recognize you unless you step out into the light, the light, the light?”

It’s a song that understands the mortifying ordeal of being known, but it also understands that the rewards of being loved make up for everything you went through to get there. When I listen to “True Love Will Find You in the End”, I really feel like every word Johnston sings is true, that I will be happy, that I will be loved. And I hope that, when the end came, Johnston was happy and loved, too.

Howl with Stephen Babcock – This is “Devil”

Boy Bjorn is “Always Searching” for Something New

NEIMY Calls Out Her Ex in “Selfish”

Be Inspired by Nature with Leah Capelle’s...

Dance the “Holiday” Away with Retro City

The Story Of Sinnober’s “Angels of Fire...

The Story of Jack Gray’s “Fools”