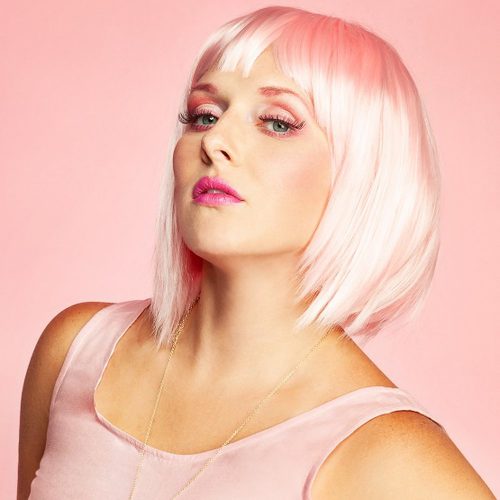 I knew that I’d love “Rose Gold” from the moment it started. Lush, jazzy piano chords, bouncy yet elegant, kick things off, before being helped along by warm bass and crisp drums. Soon, Merrell’s voice comes in, and it’s a joy to listen to: bright, silvery, cool. Everything sounds so effortless; there’s no showy piano noodling, no forced, faux-soulful vocal runs. Despite how rich and colorful it sounds, it still feels completely natural.

The easiness of its sound helps ground the lyrics, too. Merrell’s music has been called “thesaurus pop”, and her lyrics are dense with evocative ten-dollar words and playful alliteration; phrases like “poised, posed, panglossian” and “closet of cashmere and piaget” are just a taste of Merrell’s style. Lyrics like those have a high degree of difficulty, because it only takes one cutesy vocal affectation to make the whole thing feel cloying and precious. But Merrell is too skilled a songwriter for that; her words and imagery don’t necessarily mean anything, but they sound great. They add to the lush, decadent atmosphere, and the breezy presentation means that Merrell never sounds like she’s trying too hard.

I don’t mean to make this song sound like it’s completely unprecedented. Art pop is a genre with a long and proud tradition, and Merrell lists Kate Bush and Janelle Monae (two big names in the genre) as inspirations. But while you can hear their influence in “Rose Gold”, Merrell is making it her own. Both Bush and Monae are unapologetically extra, chasing their muses to whatever wild-ass place it takes them. Postmodern concept albums? Yonic imagery? Ulysses-inspired sex jams with bagpipes? Why the hell not?

Merrell is one of many artists inspired by their example, but she’s much more low-key than that. Perhaps she has a grander ambition that we’re only getting hints of right now; if she does, I can’t wait to see it. But for now, she’s happy to make some of the easiest, breeziest, most beautiful songs you could ever hope to hear. If you’re not satisfied with that, then what will ever satisfy you?

Joe is a writer, a critic, a musical omnivore, a Long Islander, and a bundle of anxiety. He's dreamed of making a career as a writer since he was a child, which explains why he didn't dream of something a little more practical.
PrevPreviousJulian Taylor’s “The Ridge”: Some Things Last Forever
NextRyan Cassata’s “California Woman”: Old School Cool with a Modern TwistNext