Smoking With Poets on “Nothing, With You”, Intimate Vocals, and Long-Distance Collaboration 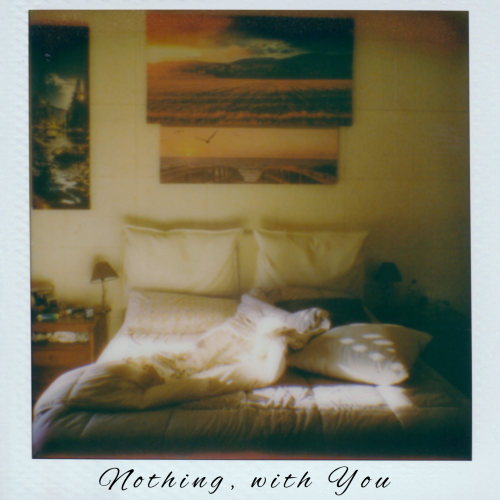 When I listen to Smoking With Poets’ “Nothing, With You,” I can’t help but think of poets Sylvia Plath and Robert Frost puffing on cigarettes after a tryst while listening to Sixties soft-pop singers like Claudine Longet and Marianne Faithfull. (In Marianne’s case, she smoked with far too many poets and lost her dulcet voice.)

Many singers draw you in with ultra-subdued vocals, but arguably no one is better at that today than Smoking With Poets’ Victoria. And main songwriter Andrei is a master of “prosody” – a songwriting term that means that the lyrics and music match perfectly.

’Cause I can do nothing on my own

But I’d rather do nothing with you

Unlike poet Dylan Thomas, Smoking With Poets doesn’t rage against the inevitability of death or lesser bummers, but celebrates small moments of wonder. In fact, they’ve written a song called “Amor Fati,” which in Latin means “love of one’s fate” – a radical acceptance of everything that life throws our way. Smoking With Poets blithely accepts the fact that the three band members and producer live in four different countries, yet they turn that challenge into great art.

You choose to go by first names in the band: Andrei, Sam and Victoria. Any particular reason for that?

We never thought about it, to be honest. The choice of using first names came naturally, but now that you ask, I believe it comes from the fact that we all have pretty distinguishable names, at least for the western world where we try to promote our music.

Are SWP’s songs a group collaboration or is there one principal songwriter?

It’s me (Andrei) who writes music and lyrics, but the contributions of the other two members are decisive in what the final product sounds like. I’m always amazed by how Victoria manages to put herself into the songs and give them the emotion they need and deserve. Then there is Sam, who adds so much texture and depth to the instrumentals. All in all, it’s a group project, and the songs I write would be so much less without them.

Victoria has a very subdued, intimate vocal style. Was she influenced by Suzanne Vega or others with a similar style?

Victoria answers: Honestly, my sound came naturally. For a long time, I thought that I had to change it and take some vocal lessons in order to make it sound stronger. I also sang in a rock band thinking that I could sound like a real rock star, but that didn’t work. It was then that I realized that I have to appreciate the natural soft voice that I have and not shame myself anymore.

I’m assuming you collaborate mainly by Skype or Zoom because the three band members reside in the UK, Italy and Russia…and your producer is in Portugal.

It was a challenge we chose to take on when starting the project. We were really surprised to learn that it actually works. Our new producer (Kikko Mori, who produced “Nothing, With You”) is from Portugal, but we worked with other people as well for our previous songs. For every song it’s always an interesting experience, especially the surprise when one of the members does his/her part and the rest of us finally get to hear it. And for me, being surprised by the songs I write is always special, a bit like a magician who is fooled by another magician.

Has collaborating with Victoria been hampered in any way by the Russia/Ukraine conflict?

There were a few issues here and there, but it made everything more special. But this is not our game; it’s a game that belongs to the big “players.” We just want to make music and I feel so lucky we were able to meet and create these songs.

Larry McClain is a former ad agency blogger who writes for music and travel magazines in the US and UK.
PrevPreviousEmily Merrell on “Closer to You,” Taking a Different Songwriting Approach, and Something Worse than the Friendzone
Next“Hummingbird” by Meiwei: A Gem from an Emerging TalentNext