The So Lows on “Means a Lot” and High-desert Inspiration 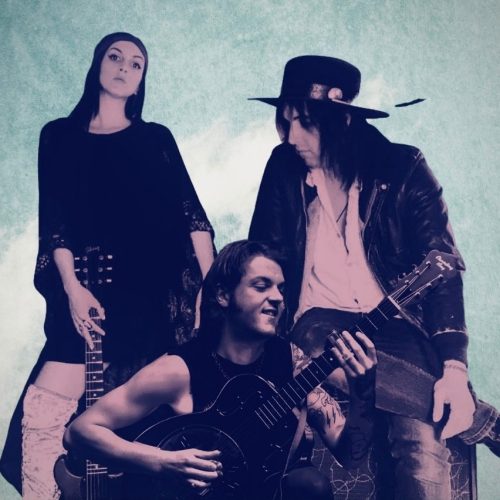 The genre we call “rock” has been in the doldrums lately. But there’s a roots-rock band that may change all that: the New Mexico-based trio The So Lows. Molly Miller and Ronnie Rael are the principal songwriters and vocalists, and Troy Krusz is the group’s ace guitarist.

The So Lows’ music reminds me of the days when mainstream rock was melodic, musically inventive and beautifully sung. Think George Harrison, Jackson Browne, Bonnie Raitt, etc. Their single “Means A Lot” has it all: great lyrics, outstanding vocals, deft guitar work and more.

So if bands like Bullet For My Valentine aren’t your cup of tea, check out The So Lows. They have the talent to restore melodic rock to the heights it once enjoyed.

“Means A Lot” has a real George Harrison feel. What’s the story behind that song?

George has definitely been a major player in our musical journey. I was raised on the Beatles and George’s writing in particular stood out. His spiritual expression through music has always really inspired me. I remember listening to “Govinda” off of The Radhe Krsna Temple record (which he produced and played on) when I was a young’n and being completely enchanted by it. Digging into that album made the rest of his music make so much more sense. I wanted “Means A Lot” to have that feeling and energy; lush and cosmic…devotional. A journey. It’s a special moment for us and a favorite of mine. Sometimes you have to scrap with your songs to lay them down right but this one came out so fluidly and naturally.

Lyrically it’s about being on a path but feeling uncertain – hesitation about the unknown. Personal doubt overshadowing guidance. And really trying to break through and trust the process. Being grateful for that guidance but feeling dissonance about how to embrace it and stay the course.

Troy:
Ronnie and Molly brought “Means A Lot” to practice and we worked out the verses and the chorus as a band. I think we had the song pretty much done when we had the thought, “Why don’t we put a really long guitar solo at the end of this?” So we added the transition and some chords for me to solo over and ran it a bunch of times at every rehearsal. When the time came for us to record it I still wasn’t totally sure what I was going to play, or if it was even going to work at all. We tracked the song live maybe 3 or 4 times, and we actually almost chose another take over this one. But we eventually chose the take you hear on the record because we thought it captured that live sound we love so much, imperfections and all. I love how it turned out, and I’m really proud of what we pulled off.

“Give All” sounds like a really skillful, modern blend of Buffalo Springfield, Poco and Rolling Stones. Were those bands a big influence on your music? Any others?

Molly:
The Stones are always a big influence for us. The power behind the vocals of Gram Parsons and Emmylou Harris were definitely on our minds with this one. I think we also took some inspiration from Taj Mahal, Bonnie Raitt, Delaney and Bonnie, etc. This song started off as a prayer, really. It was arranged differently when it was written – more of a haunting ballad. But Ronnie and I started trying different things with it and it turned into something we felt was sonically more powerful. The vocals on the verses, almost like a call and response, but not quite – that came really naturally and felt like it achieved an expression that matched the prayer.

Ronnie:
In writing for our new record, Times Not So Weathered, we took a lot of influence from the music that came out of Los Angeles in the 60s/70s, Buffalo Springfield, Poco, all of that folk and country-tinged rock n roll. CSN/&Y, The Flying Burrito Brothers, Jackson Browne, Gene Clark/The Byrds, Linda Ronstadt/The Stone Poneys, etc. Tom Petty is a big influence as well. As a band, we love and appreciate all kinds of music, there’s really an endless well of inspiration in all directions and sounds.

Your music features a lot of great harmonies – something that you hear more in Americana than in rock these days. How long have you been singing together?

Molly:
Ronnie and I have been singing together for about a decade. When we started out, I didn’t really want to sing lead. I just enjoyed accompanying Ronnie and bringing more depth to the songs. I still feel like when our voices are paired, it’s like it amplifies the feeling of expression. There’s something in that vibration that really resonates with me. I really love the depth that Troy has brought to those harmonies, too. The three-part harmonies have taken it to a new level. We always considered what we do to be rock n roll, but we’ve taken a lot of influence from Gram and Emmy so there’s that country influence, you know, the cosmic American music influence…it’s all American roots music to us. We’ve never considered ourselves to be “Americana” although that label does get mentioned and I understand why. But I think strong harmonies can exist in rock n roll without the other elements of the music leaning into what is considered Americana.

Larry McClain is a former ad agency blogger who writes for music and travel magazines in the US and UK.
PrevPrevious“Layers” by Joel Ansett Asks Simple Questions That Open Up Entire Worlds
NextAarktica’s Ambient Epic “Can’t Say I’ve Missed You”Next