Will Dailey – The Story of Golden Walker

For singer-songwriter and Boston native Will Dailey, inspiration can be found in the most mundane of experiences — or a once-in-a-lifetime encounter with a sculptor in a tiny village in France.

“All the gold is being taken from our world,” the sculptor told Dailey after hearing his performance. “They take it all to use in technological devices that are supposed to help us communicate. The gold is disappearing, hidden in phones and computers that only leave us feeling more alone, separated, and disconnected.”

“When I heard you tonight through the walls of my workshop, I heard real communication. I heard you. You are a communicator.”

Even more extraordinary than his words, however, was the sculpture he crafted and presented to Will — a man with a gold nugget on his foot, called “The Golden Walker” — along with a calling over his life.

I sat down with Will following the June 1 release of his album, Golden Walker, to discuss the twisting paths of fate, an artist’s responsibility, and the careful balance of life as a musician, a father, and a global citizen.

Listen to the music here, and read on to get the full story.

Let’s jump right in, because the story behind Golden Walker is so fascinating! How did a chance encounter with a sculptor in France impact you, personally and as a songwriter?

Well, like so many of us, I lie awake at night wondering how I messed this all up so perfectly. Artists, and particularly songwriters/performers, constantly measure [ourselves] against what is considered popular or successful. Imagine a lawyer being compared to Judge Judy, or a teacher constantly being compared to Mr. Rogers. That can build up on you in negative ways no matter how well adjusted you are, and how much the art itself liberates you from false constructs.

So when sage-like wisdom emerges from the night [and] takes you on a journey, it lifts up your belief in your chosen path. You get some wind in your sails — at least enough breeze to carry through the making of an independent album.

I’m curious; did the sculptor craft the original “Golden Walker” in front of you? Did you have any idea he was going to give you not only an original piece of art, but a calling on your whole life while you were speaking with him?

He did. Fire and brimstone. It is covered in this little video we made for the song “Middle Child.” I had no idea what was going on until it was done. In fact, I was in a defensive pose until his narrative was complete.

What do you think connects all artists — whether a songwriter, a sculptor, or a painter — and drives them to create and share their art with the world?

Hold on while I find a piece of music to help me explain my answer.

With Golden Walker, you call listeners to “turn away from our screens and toward each other.” There are so many occurrences worldwide that inspire anger, division, and sorrow. In your opinion, what responsibility do you feel as an artist to share peace, love, and unity through music?

The unity through music is the easy part. Unity is music’s built-in elixir. Music feels like the first and last line of defense for our sanity and mental health, the first thing to open us up when blocked and that last hope to pull us out of the fog when we are slipping away.

Once you know that, it’s hard to go back to text someone the truth.

It’s been said that your album was written as a “handbook for accountability…especially from the perspective of being a straight white man and a father.” Why have you made it your goal to not only share compassion and connection, but to promote accountability to ourselves and each other?

There is a future out there enthralled with dissecting and understanding our tumultuous current moment. They need to know we haven’t all lost our minds. Loneliness is an epidemic right now and a lot of men don’t know how to say they are lost. I love saying it, and, in doing so, know that I’m probably not.

Your music is incredibly introspective, but it also tackles universal themes of love and loss, and international events, specifically the Women’s March of 2017 in “Bad Behavior.” Why did that event in particular inspire you to write and record a song?

Oh, just watching the mental gymnastics people do when they try to find something wrong with people/groups standing up for their rights and collective freedoms. The bravest of actions are often considered bad behavior by those most fearful of losing unearned or corrupted power.

Where do you find inspiration for your music? How has your hometown — Boston — shaped you as an individual and as a songwriter?

Inspiration is a funny thing. It comes from everywhere and anything. The good, the bad, the ugly. Boston helps because you have to be crazy to want to live in Boston or New England and be a professional independent artist. There is very little practical support.

There is a profound community of music lovers and fans, but there is zero architecture in New England for either the artist or the culture to capitalize on a project gaining momentum. That can easily change. But in the meantime, there are some of the best musicians and creators anyplace here.

Probably because we all share in that insane sacrifice of living in the Northeast and making it work.

Golden Walker debuted in the Top 20 on iTunes Singer/Songwriter charts and has been globally recognized by critics. Did you have any idea that you would see such success with this record? What does that success mean to you?

If you make something with a true and honest intention, it will find a group of individuals amongst our 7 billion that will connect with it, understand it, and even need it. The difficulty in finding those connections is the signal to noise ratio of our everything.

So reviews, charts, interviews, videos — they all just increase your chances of making a connection, which is the only true success. Somebody telling me that they can’t stop listening to Golden Walker and their favorite moments is infinitely more enriching than any view count, play count, chart or baby being named after me.

How have you changed as singer-songwriter and artist from your first record, GoodbyeRedBullet, to your latest release, Golden Walker?

Sometimes I think not at all and sometimes there is no going back.

What’s been the biggest difference in writing Golden Walker and your previous records?

Speed. Golden Walker starts and then keeps going. One song goes into the next. It is something you either decide to participate in or move onto the next thing. I didn’t want it to be possible that you could put this on in the background and let it drift away. You have to engage with it or leave it.

Either is fine. We all got shit to do.

Your music has been compared to Boz Scaggs, James Taylor, Ray LaMontagne, and Tom Waits, with a hint of Pink Floyd and the occasional disco groove thrown in. How have you been inspired by legendary artists like these, while developing and maintaining a voice and style that is distinctly yours?

I get influenced by everything, even the things I don’t like. The secret greater goal is to have an indie carrier where you are constantly compared to “household named” artists, so much so that this list becomes so long that it stands as evidence of your own artistic vocabulary, pluralism and adventure.

What do consider to be the hardest part of defining your sound and your place in the music industry?

It is far easier with the way the algorithm works in our digital music stations and social media to be of one sound and genre. If each song on a release bears a genre similarity, the algorithm rewards that consistency. If you want to stretch your legs, you have to pay for the seat upgrade.

Do you ever feel any pressure from the outside to change or adapt to fit into a box?

Yes. An artist is constantly reminded of boxes, parameters, and algorithms; even more so when they are releasing music digitally. That doesn’t mean the pressure is a swaying factor, but it makes itself known. In all the artists I love, the pressures create fuel that runs a machine within to destroy such boxes.

At what point did you know that music was what you were called to do? Have you ever doubted yourself as an artist?

It was my first memory. I confidently doubt constantly. 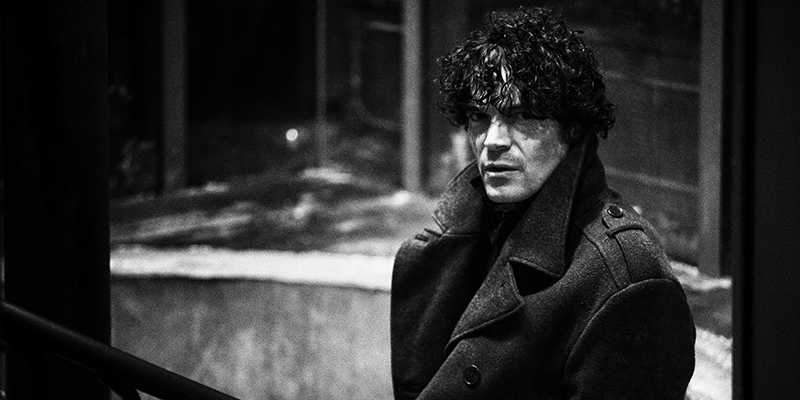 How are you able to open yourself up and be vulnerable to listeners night after night?

I’m not sure I nail it every night. Sometimes the elements are against you. That is the joy and rush of it.

Part of the addiction is getting back there because the high is so pure and seamless when it is happening. Best way forward for me is being honest with myself going into each performance. If I’m feeling on top of it all, then it is that kind of night. If I’m feeling crushed by it, it is that kind of night. Both have the chance to connect with people in an honest way.

You’re a prolific songwriter, tour heavily, and you’re a father. How do you not only balance but find harmony within these roles? How do the sometimes opposing forces — a desire to share your music with the world and your dedication to being there for your family — reveal themselves within your music?

Art comes out of opposing forces coexisting and leads the artist to their first moment. My greatest fear artistically is that I put myself in a place of comfort that puts life in music before life with music. The former would only stifle the journey in music.

What do you hope listeners take away from Golden Walker?

Things keep giving to you when you listen.

What’s next for you?

Going to work on having a better relationship with the passing of time, and lay songs for willing (and maybe unwilling) ears. Expand on Golden Walker. Let some stuff come out of the blue. But find some blue first.

Born on the Okefenokee Swamp and raised on rock 'n roll, Luci Turner is a full-time musician and writer whose passion for music led her to Atlanta. She's most often found packing a suitcase, digging through a pile of records, or looking for a time machine to the 70s. You can follow her on Instagram, and check out her band, BEAU + LUCI, here.

The Power of Damien McFly’s “Leap”

Zawe’s “Forget” Is Audio Self-Care At Its Finest

“A Man Behaves” by Sequentia Sequentia: Coming to...

Jonah Corren on Ennui, The Countryside, and “Dreaming...

Michael Baker’s “Caught in the Crossfire”: An Exploration...

“I Wanna Disappear” by SHYAWAY: Involvement from a...

Emily Barker’s “Where Have The Sparrows Gone?”: A...

Hey, you. I just wrote a book on how to promote indie music.

It’s called How to Promote Indie Music. Pretty straightforward. Anyway, it answers the questions I usually get asked by artists – stuff like:

“What platforms should I do promo on?// How do I do it? // How do I build a fanbase?// Do you really know Sandra Bullock?”

Want to read the first chapter? Put in your email below and check it out.

If you want to cut to the chase and read the whole thing, click here.