Will Wood on “White Noise,” Decisions on Singles, and Empty Celebrations 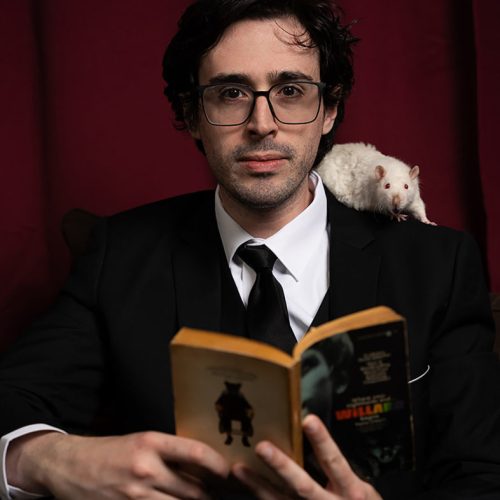 Will Wood has established a cult following for his clever, theatrical music, and it’s not hard to see why it’s struck a chord. A songwriter with the incisive clarity of Bo Burnham and Lemon Demon’s knack for playful absurdity, Wood uses quirky themes and presentations to explore the gnawing horror of the modern condition. “Suburbia Overture,” the opening track of 2020’s The Normal Album, places cheerful suburban banality alongside sadomasochism and animal torture; elsewhere on the album, there’s a song called “Marsha, Thank You For the Dialectics, but I Need You to Leave,” something unspeakable happens with radiation, and the phrase “somebody help me” is followed by an incongruous “woo!”

Ahead of his upcoming album, in case i make it, Wood has released a number of singles. Some, like “Tomcat Disposables,” are lush and welcoming, while others, like “Fitter Happier” for the TikTok age “You Liked This (Okay, Computer!)”, seem to go out of their way to confound expectations. But none of them have sounded quite like “White Noise,” which sees Wood lamenting the deadening blandness of modern aesthetics before gleefully defying them. Over a delicate ukulele figure, Wood sings about walls painted colors like beige or off-white, as well as music that seems to be “[written] for ignoring.” In a time when Spotify playlists and social media algorithms seem determined to lull us into complacency, the lyrics ring true.

It just makes the song’s climax even more heartening. Instead of accepting this numbing complacency, Wood provides an alternative, bursting out with some of the most uplifting, optimistic-sounding music of his discography. While he’s still decrying metaphorical white noise as both “an aesthetic” and “anesthetic,” he’s backed by swelling strings and a Bulgarian choir(!), and it feels like the start of something new for Wood. “Does it cure cancer?” Wood asks of white noise in a call-and-response with the choir: “Yes, it cures cancer!” Of course, white noise doesn’t cure cancer – neither does “White Noise.” But they both offer treatment for a greater sickness that’s even harder to shake off; would you rather choose the treatment that numbs you, or the treatment that brings you euphoria?

Tell me a bit about what inspired you to write “White Noise.”

I was living outside Atlantic City a few years ago, and I remember sitting at the little end table I was repurposing as a desk, ‘cause I was in the most fledgling sort of moments of my career at the time, feeling this really weird heavy yet hollow sort of feeling behind my face. I was fiddling with my ukulele, which I was totally new to at the time, and kind of disappearing in the sound of the fish tank by the balcony, and zoning out to the waving textures of the rental-safe off-white walls, popcorn ceiling, and sand-colored carpet. I had had this feeling before, and it was combining with the HPPD I got from doing too many hallucinogens when I was younger, and I remember kind of wondering why I’d never tried to actually express this thing and decided to give it a shot. I have trouble describing what the song is “about” really, I just know the feelings and some of the conclusions I feel like I draw with it.

From the sound of the singles for your upcoming album it’s a big step up in budget from your previous works. What was it like having a full set of tools at your disposal, so to speak?

In addition to having developed a lot of new skills and knowledge since the last time I recorded an album, having so many new tools at my disposal allowed me to really get into the details. I was able to take on experiments I couldn’t have before, use sounds I’ve always wanted to use, and actually take what’s in my head and put it down on record accurately.

What’s striking to me about the singles for this record is that some of them, like this song and “Cicada Days,” sound like what one would imagine a single to sound like, whereas “You Liked This (Okay, Computer!)” very much doesn’t. What made you decide to release a decidedly un-commercial song like that ahead of the album?

I mean, my intentions aren’t really commercial. My goal isn’t really to make money on this album. I mean, I hope I do, but I didn’t make any choices based on what I felt would sell. I save that for the merch table. I just picked the singles based on what I had a video idea and resource for and what I really wanted to express. There are definitely songs on the new album that would’ve been way safer and smarter for marketing based on what I’m better known for, but that’s not what I want to focus on artistically, you know?

This is a pretty fertile time for theatrical, absurdly comedic music like on The Normal Album (Bo Burnham, Lemon Demon), but this sounds like a rather new direction. What inspired it?

I don’t really do electronic music and like, sure there’s a sense of humor in my stuff but you’ll find I’m 90% non-digital instruments and mostly relatively straight lyrics. I adore and admire Burnham’s work, and LD has done some cool stuff, but I don’t make that kind of music and never really have. I don’t even know how.

I feel like my new stuff is a pretty natural progression from my older stuff, but of course there are some big differences, and I think it’s a bummer when artists don’t make big changes between records. I’ve just grown up and learned a lot and changed a lot as a person, so of course my music has too. But I’ve always had softer, more acoustic, and major key tunes peppered throughout my discography, and ICIMI has 16 tracks on it, some of which is gonna feel pretty stylistically familiar to some listeners, just with more complex instrumentation.

Finally, tell me a bit about this music video.

I had the idea of doing a performance video where I lip synced with everything but my mouth a long time ago, and it wasn’t until Jake Feldman and I were struggling to make a totally different video idea come together that I made the connection between that concept and “White Noise” thematically in my head. It then fell into place with a “White Noise” video concept I’d had for a while, where people were celebrating with empty glasses and invisible cakes and gift boxes with nothing in them. It was the theme of absence, emptiness, and meaning despite meaninglessness that really kind of inspired the whole concept, and contributors to the Indiegogo campaign that funded the record ended up starring in the video which was a lot of fun.

Joe is a writer, a critic, a musical omnivore, a Long Islander, and a bundle of anxiety. He's dreamed of making a career as a writer since he was a child, which explains why he didn't dream of something a little more practical.
PrevPreviousHow to Grow on TikTok in 2022
NextLainey Dionne on “2009,” Winning Awards, and European BoyfriendsNext