Carousel Rogues – The Story of “Cut Me Cleanly”

I came to that realization this fall during a road trip through central Pennsylvania. We were cruising under blue skies through autumn-gold hills when the aux cord guardian started pumping Seize the Day through the speakers. The vibe of the music instantly fit the drive like a soundtrack.

It’s a vibe that’s got a golden feel to it; melodic guitar hooks, shimmering vocal lines, and the kind of clever, rhythmic pop lyrics that are both immediately catchy and begging for a second listen, lest you miss the quick-witted quips woven throughout. It’s musically intricate stuff, too; songs like “Cut Me Cleanly” (please watch the music video) are laden with instrumental interludes and progressions that are sure to earn nods of approval from music nerds.

My favorite part of Carousel Rogues, though, is the sense of fun that pervades the band’s music. From the driving, garage-band energy of “Seize the Day” to the engaging, stop-and-start trickery of “The Last Hurrah”, Carousel Rogues’ musical catalog is eclectic, but it’s consistently infused with joy.

So, roll down the windows, turn up the stereo, and join in on the fun. Then, circle back here for a look at how the band makes music that’s such a good time, and learn how things came together for the bright-sounding, darkly comedic “Cut Me Cleanly”.

And, be sure to check out their website here.

When did you start writing songs? How’d you get into it?

Caitlin: I started writing music in high school. There was this crop of young female singer songwriters popping up on the radio, and I wanted to try my hand at it. It wasn’t until college, though, that I figured out how to write the kind of songs I wanted to. I realized I wanted to write for a band. Zach and Dan started gradually writing more and more once they were in the band.

Why do you write songs? What’s your goal when you write a song?

Do you think songwriting is more selfish or unselfish?

I wish I could say it was more for other people, but I’m probably kind of selfish about it. I get a little sad when I’m not writing.

How did you find your current style?

I think all of us learned to write from listening to bands we loved and studying them.

Over time, we started to recognize elements in our songwriting that were more signature, and we honed in on those. It’s similar to coming to terms with the way you communicate.

Who are your influences?

All three of us are crazy about the style and texture of bands like Weezer and the Cardigans, and about the energy of power-pop bands like Fountains of Wayne. I tend to find something I love and listen to it pretty exclusively. Those bands have shaped our sound a lot.

What is your favorite song of all time, and why?

Caitlin: Ooo! So tough. I guess I’ll go with “God Only Knows” by the Beach Boys. The surprising ways that one chord resolves to the next and the orchestration are amazing to me, and they communicate something really special that I don’t think I’ve heard in another love song.

Zach: “Burn” by Jeremy Enigk. The scope of this song is huge. Jeremy’s vocal output is super dynamic, going from soft to growling, right in step with the lyrics.

Dan: “Don’t Think Twice, It’s Alright” by Bob Dylan. It’s not a big production. It’s just him and his guitar, but it inspired me more than anything else to become a songwriter, and it still reminds me of why I love music every time I hear it.

What makes music or a song good?

Caitlin: I think music is good when it’s effective at serving its purpose. Generally, the purpose of music is to make the listener feel something. A sad song is like a friend that mourns with you. A power-pop song is sometimes like a friend who celebrates with you.

How do you write? Do you start with lyrics or a melody? Chorus or a verse?

Caitlin: I do most of the writing for the band, and usually it starts with an instrumental hook or melody line. Often though, there’s just a string of words attached to the melody when I first think of it, and they probably have more to do with the rhythm than the actual content. Often though, they inspire whatever the song will be about. The three of us usually sit down with one of my demos and work out the right parts together.

Do you guys co-write? How’d you start, and who writes which parts?

Caitlin: I co-write with both Zach and Dan. They both come up with ideas I’m crazy about, so it’s really fun and exciting to me to help them finish something. Both of them come up with great lyrics and music, and I just kind of help develop them until they’re finished.

How do you write a melody?

These often just pop in my head or come to me in a dream. If I’ve been listening a lot to one particular kind of music or artist, that will often inspire whatever I come up with.

How do you write lyrics?

I really deeply appreciate lyrics that say something creatively, and I try to do this myself. I like to write them in such a way that the words I put together make the listener feel the same thing I’m feeling, even if they aren’t saying something in a literal way. We have a song called “Pete Gets Happy” that we haven’t released yet. There’s a line that goes, “Stay. I’ll say it again. Don’t leave before the movie ends.” Sure, it could be about not wanting your friend to leave before you finish the movie (and it is), but it’s also just about that sentiment in general of not wanting something to end.

Would you rather write on personal experiences or general themes, and which approach comes more easily?

Hm. I like writing about personal experiences through more general themes, because I want them to allow people to connect through them.

Do you put more emphasis on lyrics or sound? And which would you consider more important?

That’s such a close call, but I think I’d say that sound is slightly more important in our music. The same lyrics could be matched up with a different sound and probably wouldn’t inspire me as much. The pairing is really important.

What emotions, thoughts, feelings do you want your music to inspire?

I think I’d love for our music to inspire hope. I don’t know that we’re there yet, but it’s a goal.

What role does production play in your writing?

Production is probably the most important role in our writing! The way a song is arranged is the first thing that makes me respond emotionally as a listener, and the first thing to inspire a song idea. Our songs are so heavily built around the way we produce our initial demos.

What advice would you give other songwriters?

Don’t start with just words. Lyrics are meant to have a melody when they’re born, I think. For me, just writing words on a page with no music kind of feels like making a person without a soul. They should be inseparable.

What was the first part of “Cut Me Cleanly” to be written? Was it lyrics, melody, a riff?

I was plucking the guitar chords first and the line “I can taste the blood every time I remember,” and for some reason, the rest of the music, lyrics and production came very quickly. 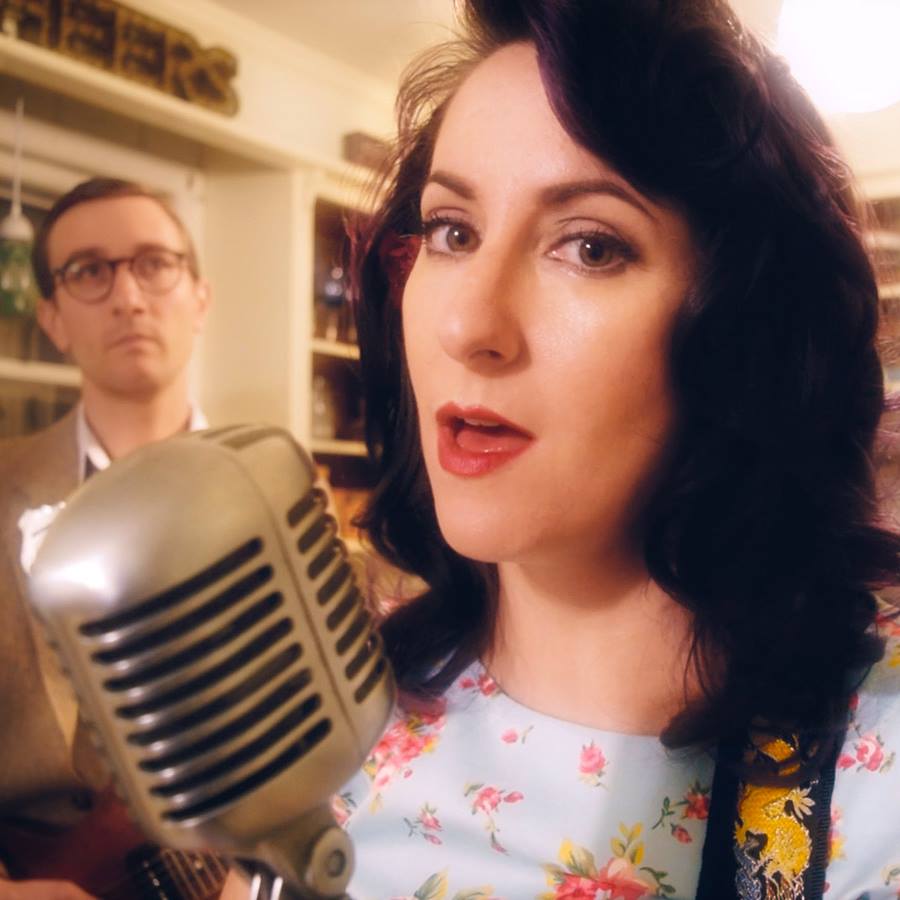 Where did the main metaphor come from?

It came out of the rhyme scheme that was happening in the chorus. The song is kind of about a dysfunctional relationship, so the metaphor “cut me cleanly” is kind of saying, “I know you’re going to hurt me because that’s what we do to each other, but at least make it a clean cut so that it can heal quickly.”

Is this about a specific situation or relationship? Would you be willing to share?

It was inspired by an old unhealthy relationship that kept trying to revive itself and needed to be snuffed out, but the song quickly took on a playful feel. I wanted it to be kind of passive aggressive and comical.

I feel like the sound of this song fits really well with the clever, fast wordplay. How intentional is that, and how easily did it happen?

Definitely intentional! I try to write music, lyrics and melody all at the same time so that they sound like they belong together as different elements of the same thing. The lyrics are kind of passive aggressive, and I think that’s why the vocal and the music came out sweet and dark at the same time. We went for that same feel with our music video as well.

Did you write this for yourself, another person, or an audience of people?

I wrote it for myself, but with an audience in mind, too. I try to imagine how I would feel if I heard a song as a listener instead of as the writer while I’m working on it.

The music video is great. How closely is that tied to the ideas behind the song?

It’s pretty closely tied in. The production is pretty vintage-sounding, so the obvious thing to do was something that takes place in the 50s or 60s. Dan wrote just about all of the script. We were a little bit nervous about doing something a little darker, but we tried to keep it funny, too.

What do you want listeners to take away from this song?

That it’s good to have a sense of humor about hard stuff, even if it’s dark humor.

When did you know the song was finished?

The song felt finished to me when I finished writing the instrumental interludes between the sections. They really helped develop the character of the song.

We worked with a really great producer, Ben Shive. He was an obvious choice for us because he’s very well-versed in music theory and orchestration, which are very important elements of our music. I like our music to come across edgy but also down-and-dirty-music-nerdy.

What’s next for you in terms of upcoming music and shows?

We are saving right now to finish a 4 or 5 song EP. In the meantime, we are working on a couple more video projects that we are really excited about!

Andrew Adkins – The Story of “Fire and Brimstone”

“Hear Your Heart” by Tom Peregrine

“Land of No Junction” by Aoife Nessa Frances

Feel narou’s Deep Pain in “You Are Gone”

Stu Larsen – The Story of Marigold