Henry Nozuka on “When the Sea is Quiet and Calm”, Meditation, and His Creative Process 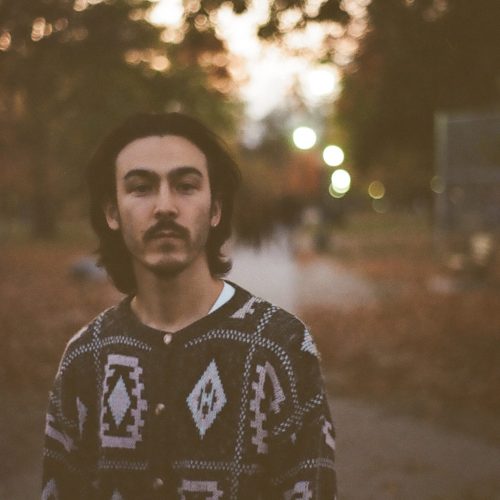 To hear the gentle vocals and thoughtful guitar plucks of Toronto singer-songwriter Henry Nozuka’s new, aptly named single “When the Sea is Quiet and Calm” is to access the part of your mind where only calm exists. Here, in this state of peace, you can be almost as ethereal and lightweight as the gentle breeze you imagine washing over you while listening to Nozuka’s soothing illustration of a serene ocean scene.

The slightly distorted sound effect of the guitar plucks creates a nostalgic, authentic feeling, and adds a little more depth to the song than if it were plain and clear strumming. The eloquent background strings and humming also contribute to depth of sound, while pulling us further into the song’s romantic essence. Later in the song, we hear light, bell-sounding tones that truly elevate the production to the realm of effortless whimsy. The simple yet sentimental lyrics depict the heartwarming landscape that is the ocean on a calm evening.

The world feels pretty crazy lately, and the best moments of reprieve, at least for me, are found in losing the world in a song. In those moments, only that song and wherever it takes you exist.  This single by Nozuka is that kind of song: it takes you to a faraway place where the sun is setting over the sea that “looks like a piece of glass”, and where any problems that might be on your mind are far far away, masked by the “quiet and calm”.

Did you have a specific time or place in mind when writing this song? If so, when/where?

I’m not sure if I had something specific in mind when writing this song, but it rather was a reflection of the time I was in. I remember that I wrote this song at the time when I began learning to meditate, and so I was drawing upon the beautiful things that I was reading and inspiration I was getting from the meditation.

How do you find the inspiration to write such a peaceful song (considering the crazy state of the world right now)?

I took some time away from the world right around the time of writing this song, and lived at a meditation retreat center for three and a half years. During this time, I was away from all internet, and could spend my time in nature, and focused my time living as simply as possible. With a simple lifestyle, and a strong focus on meditation, I found that when I returned to the world, I was able to cope with the difficulties a bit more. It still does get to me at times, but the pillars that help me through these difficult times are: not over-saturating myself with the internet/social media, focusing on a simple lifestyle, and meditation.

Could you describe the process of playing and recording the song? I.e., the specific elements of sound such as instruments, vocals, etc.

I wrote this song in 2012 actually, and left to the meditation center soon after. When I returned back to Toronto in 2015, I reached out my friend Tommy Paxton-Beesley (River Tiber), to see if he would be up for recording it. We began with a few hour sessions at his studio. This was probably the biggest learning experience I have had as a producer. Just watching him work, and seeing how he did things with such quality was incredible. He recording my guitar to tape, I think with an SM 58, and then I did a scratch vocal. He recorded his cello and violin in about a half-hour. We looped the section and he just continued creating the parts up as he went, using his mind to create the arrangement on the spot. It was quite remarkable. He also recorded his vocals in the same way. It actually took us another three years before I was ready to sing the vocal, and could get a good take! My voice was a bit underdeveloped after taking so much time off music. We finally did a session at my place last winter, and I ended up using this song as the main inspiration for the whole album.

How did you decide on or come up with the guitar riff for this song?

It just came up randomly! I think things just come out magically sometimes, and to me writing music is something that can’t fully be described. When you start doing it, things just happen nicely sometimes. I think once you get accustomed to an instrument, parts will just come.

What does your songwriting process look like? Do you take your time writing songs or can you conjure them pretty quickly?

When I start writing I usually take like a week and just focus on writing songs all day. I try to get as many ideas as possible, and then I’ll sit with them, and decide which ones I want to pursue and spend more time on. I like the intensity of this process, and I find that it’s a nice way to really delve in. Sometimes things come in like a half-hour, and other times it takes several revisions. I think that it’s important to write a lot of bad songs, and then out of five or sometimes ten songs there will be one that is good. Sometimes songs come though after I’m inspired from watching a film or after an important life experience. I like listening to audiobooks as well, and I’m a big fan of [Hayao] Miyazaki.

Boston University journalism student from Vermont with a particular interest in the fields of music and radio. I enjoy traveling, playing guitar, and spending time outside hiking, kayaking, and swimming.
PrevPreviousJulianna Money on “27”, Stevie Nicks, and the Chattahoochee Valley
NextKINO MOTEL on “Waves”, Gritty Pop, and How a Blonde Wig Brought Them TogetherNext