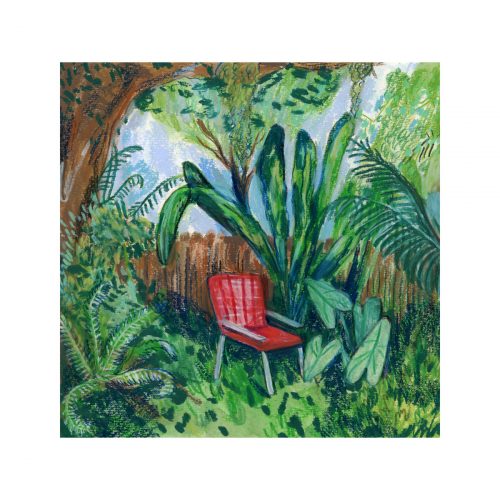 There is something satisfying and bare-knuckle about kicking back and listening to a wonderfully simple, well-crafted, and laid-back indie-rock tune. It’s the kind of song that makes you nod your head along to the cool beat and smile because it reminds you of simpler times.

“Johnny” – the title track of the second studio album released by the duo Lawn – provokes this sense of ease and nostalgia with its whimsical lyrics and heady production.

Johnny’s got a rocket

He’s gonna take it to the sun

Picking off the pieces

A little part of everyone

I don’t know about you, but these lyrics, along with the overall pleasantness of the music, immediately take me to a sunny day in some childhood backyard where a little boy is playing with his rocket. It’s as though Lawn is thinking back to their younger selves, exploring what used to be in juxtaposition with what is.

The lyrics go on to allude to the feeling of being somewhat jaded with life sometimes (especially as we become adults), with a pause in between each line to almost mimic a train of thought, where there are sometimes gaps as we turn those thoughts into words:

Not that I get sick of it

Caught up in the thick of it

Then there is another verse which seems to continue the theme of nostalgia, as they mention someone named Mary, how she finds “safety in the setting sun” and that she’s “the brightest one”. A second reference to the sun sustains the (so far) mostly playful and upbeat spirit of the song.

The faster-paced, louder chorus delivers the message that whatever lies we told or were given when we were young, the important thing is to surround ourselves with honest people who will help us get by as we get older:

Someone should tell you the truth

That you do when you’re young

To keep from cryin’

It’s not about how you stand up to the dust

But who you learn to trust

The next verse is a reminder of what it means to live a life we can reflect on with contentment, and building that life for ourselves:

Picking up the sticks to

Build a cabin high up in the woods

Focus on the reasons

I could make it till the flowers bloom

With so many mentions of nature – namely the sun, sticks, the woods, and flowers – the feelings of whimsy and tranquility are brought to life within us. “Johnny” by Lawn is a buoyant, well-produced, well-written jewel of an indie-rock song.

Boston University journalism student from Vermont with a particular interest in the fields of music and radio. I enjoy traveling, playing guitar, and spending time outside hiking, kayaking, and swimming.
PrevPreviousMichael Baker’s “Caught in the Crossfire”: An Exploration of Connection and Perspective
NextKate Elpo’s “Be-Longing”: A Reminder of What Makes Us HumanNext