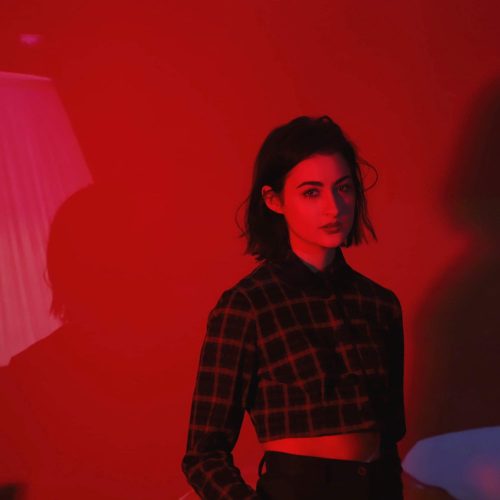 Truly passionate relationships can be elusive. But once we find them, we tend to cling to them because they make us feel so alive. Habits born out of that passion, though, can often be toxic, and that toxicity can peak during a break-up. Singer-songwriter Sara Kendall – aka Llynks – delivers this message in the first track off her debut album Become the Root titled “Rise-Fall”.

Through hypnotic, darkwave synths and haunting vocals, Llynks depicts a scene in which someone is leaving her, and the separation is causing both outward and inward conflict. In the first verse, Llynks tells us about this mysterious person:

You’re on your mission, new edition

Find someone that understands

With your hard-headed will

Only in for the thrill

Llynks seems to feel aggrieved in the second line, almost daring the other person to go find someone else who can handle their “hard headed will”, and suggesting that all that mattered to this person anyway was “the thrill”, or that feeling of being alive, perhaps even more than Llynks herself.

As the song progresses to the chorus, the increasingly unsettling, clashing techno sound represents the conflict between these two people as their separation takes place:

I can hear you screaming down the hall

I’m shaken, I shiver from your call

And with you my heart won’t rise nor fall

You left me here, trapped within your walls

Llynks delivers these lyrics with fierce desperation, enhancing the feeling that this is a highly emotional split between two deeply involved people. With words like screaming, shaken, and shiver, the physicality of this ordeal is also evident. She asserts that though this person is leaving, she will still be trapped by their “walls”, which could be interpreted as an inability to escape the remaining thoughts and scars from this relationship.

After the first run-through of the chorus, there is an eerie almost sci-fi sounding instrumental break with warped and lingering synths, as though we are inside Llynks’ mind while she takes a breath.

The intensity of this break-up seems to be nothing new to Llynks — in the second verse she tells us that this person’s behavior has always leaned towards a need to escape:

Locked into the chase

Keeping up with the pace

So, not only is this person a stubborn thrill seeker, but likely someone who is unable to stick around, needing to participate in “the chase” in order to keep up with “the pace” of that thrill-seeking lifestyle. Llynks finds herself experiencing abandonment, the sorrow of which matches the overall darkness of the song’s production.

“Rise-Fall” is an aptly named track. It details a highly passionate ending to what was likely a fiery relationship. The feeling of rising into an exciting romance is dismantled by the fall of it.