“Softly Spoken Woman” by Hands of the Heron: The Silenced Woman Gets a Voice 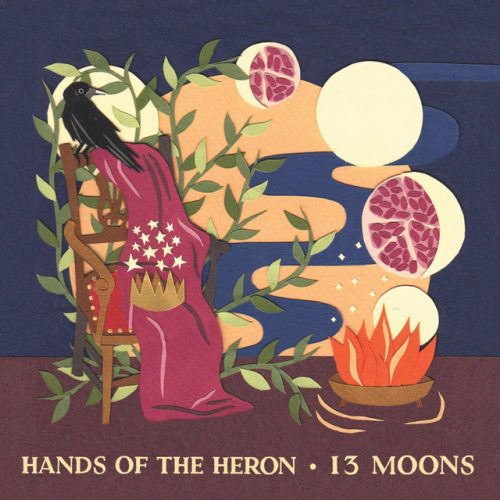 It’s often that a quiet woman is underestimated, taken for granted, and even ignored under the assumption that her silence suggests a simplicity of thought or character. In truth, however, it’s more likely that she’s silent because she is drowning in oceans of thoughts, worries, and ideas. In many cases, it is the quiet woman who harbors the deepest, most profound introspections and therefore a fear to share them with the world.

This phenomenon is illuminated in the song “Softly Spoken Woman” off of British songwriter’s collective Hands of the Heron’s new album 13 Moons. The slow-building, romantic single offers the listener a peek inside the inner workings of a “softly spoken” woman’s mind via ethereal harmonies, poetic lyrics, and whimsical production.

The song opens with delicate acoustic guitar plucks, soon joined by an equally gentle electric guitar riff, eventually followed by simple yet smooth vocals introducing us to a…

Speak softly to me

Of the things that you have seen

Of the pieces you have been

These lyrics represent a willingness to hear from someone who is likely not often the receiver of questions about herself, and equally unlikely to share those answers unprompted. It’s a foreshadowing that the contents of the song will focus on the contents of a woman’s mind, because even if she is not overtly forthright with her observations, she certainly has plenty of them.

Interspersed within and without the vocals are eccentric, almost medieval-sounding clarinet notes, which are accompanied by subdued yet deliberate strings. These elements serve to carry you through the song, simultaneously predicting the next verse and giving you time to ponder the lyrics:

I saw you, I saw you

Got a glimpse of you

I got a glimpse of you

Just beneath my skin

This verse suggests that the woman singing is in fact singing about, or maybe even to, herself, as this softly spoken woman is hiding “just beneath [her] skin”. The chorus brings us back to the first verse, yet now the singer is directly telling us that this woman is indeed herself, yet we still get a sense that she is also speaking for all who are like her.

Speaks softly through me

Telling of her stories

For those who listen

Now, we’ve moved on past asking the woman to tell her stories, to her actually doing it. Yet, there is an implication that just because she is telling her story, that doesn’t mean all will listen. This is emphasized by a repetition of the word “listen” by new vocalists. An introduction of harmonies from other females emphasizes the fact that this softly spoken woman is not on her own, and not the only one who has stories and ideas to share.

We then get a verse which goes into more detail about what specifically might be going on in this woman’s (and likely many others’) heads, and why it is kept inside:

Or self doubt to your soul

Here, we get a clear and salient reason for the soft-spoken nature of this type of woman. The lyrics are suggesting that she is quiet because she unhealthily questions herself, thus preventing an outward sharing of her thoughts.

“Softly Spoken Woman” by the Hands of the Heron is essentially a love letter – delivered by a soft, layered, and flowing production – to the women of the world who have plenty to say, but are afraid of not being heard. As she says at the very end of the song, those stories are waiting to be told,

For those who listen

Want to listen to me

Boston University journalism student from Vermont with a particular interest in the fields of music and radio. I enjoy traveling, playing guitar, and spending time outside hiking, kayaking, and swimming.
PrevPrevious“This Town Won’t Miss You” by Brooklyn Doran: Nostalgia Ain’t What It Used To Be
Next“Rain Song” by Emile Mosseri and Han Ye-ri: Tender Theme of “Minari”Next